Metal bended folded & made into 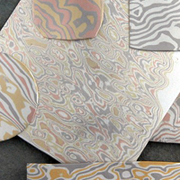 History of Metal and how it was made.

In chemistry, the term 'base metal' is used informally to refer to a metal that oxidizes or corrodes relatively easily, and reacts variably with dilute hydrochloric acid (HCl) to form hydrogen. Examples include iron, nickel, lead and zinc. Copper is considered a base metal as it oxidizes relatively easily, although it does not react with HCl. It is commonly used in opposition to noble metal.
In alchemy, a base metal was a common and inexpensive metal, as opposed to precious metals, mainly gold and silver. A longtime goal of the alchemists was the transmutation of base metals into precious metals.
In numismatics, coins used to derive their value primarily from the precious metal content. Most modern currencies are fiat currency, allowing the coins to be made of base metal.
The term "ferrous" is derived from the Latin word meaning "containing iron". This can include pure iron, such as wrought iron, or an alloy such as steel. Ferrous metals are often magnetic, but not exclusively.
Noble metals are metals that are resistant to corrosion or oxidation, unlike most base metals. They tend to be precious metals, often due to perceived rarity. Examples include tantalum, gold, platinum, silver and rhodium.
A precious metal is a rare metallic chemical element of high economic value.
Chemically, the precious metals are less reactive than most elements, have high luster and high electrical conductivity. Historically, precious metals were important as currency, but are now regarded mainly as investment and industrial commodities. Gold, silver, platinum and palladium each have an ISO 4217 currency code. The best-known precious metals are gold and silver. While both have industrial uses, they are better known for their uses in art, jewelry, and coinage. Other precious metals include the platinum group metals: ruthenium, rhodium, palladium, osmium, iridium, and platinum, of which platinum is the most widely traded. Plutonium and uranium could also be considered precious metals.

Forging, once and for all! by Kevin R. Cashen, www.cashenblades.com

The Growth of Metallurgy

A Short History of Metals 7 Replies

A Brief Dissertation on Metals By: Frederich Von Teufel

Metalworking and the Smith

You need to be a member of Metal bended folded & made into to add comments!

Comment by jene on November 18, 2010 at 9:53pm
Thank you for the invite, I watched a program on the Japanese swords and how they are forged. It was very amazing too.