Caera is a singer, harper, teacher, and writer, who is very passionate about the music, languages, and history of her Gaelic ancestors. 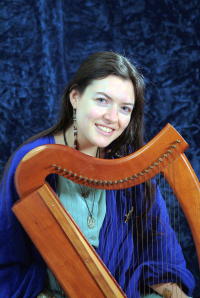 Caera is a singer, harper, teacher, and writer, who is very passionate about the music, languages, and history of her Gaelic ancestors. She plays a clairseach, a brass-strung harp modeled after medieval harps from Ireland, and sings in all three Gaelic languages (Irish, Scottish, and Manx) as well as other languages.

Caera performs a variety of songs from a variety of time periods and places. She performs songs and chants from the Middle Ages, mostly from northern and western Europe. She also has an ever-growing repertoire of traditional songs from Ireland, Scotland, Wales, and the Isle of Man. Many of these songs are in the native languages of these countries. She has a particularly strong interest in the sean nos singing tradition of Ireland, and in the puirt a beul (mouth music) singing tradition in Scotland. She has studied these styles in the Boston area and in Ireland. In addition, Caera writes her own original songs, in English as well as in Irish Gaelic.

In performance and in teaching, Caera strives to make the Celtic languages, especially Irish Gaelic, accessible and easy for anyone to understand -- whether they only speak English or not, whether they are familiar with traditional Celtic music or not, and whether they have Celtic ancestry or not.

Throughout her career as a performing musician, Caera's singing has been compared to that of Máire 'Moya' Brennan (of Clannad), Nóirín ní Riain, Karen Mattheson (of Capercaillie), Karan Casey, Loreena McKennitt, and several other notable singers in Celtic music. She has also collected such comments from her audiences as "Now I know the angels sing in Gaelic," and "I would walk on broken glass to hear you sing." In 2004 Caera won three gold medals in the Columbus Feis for Gaelic singing and poetry, and in 2005 Caera returned to the Columbus Feis and won five gold medals, in Gaelic singing and poetry, and in harp performance.

Caera released her first two full-length albums in 2004: "Wake the Dragon" (by Môr Gwyddelig, which Caera was a part of), and "Through Misty Air" (Caera's solo debut). These albums contain original, traditional, and historical music in Welsh, Irish, Scottish Gaelic, and several other languages, on Celtic harps with female voices.

In 2006, Caera released 3 new albums in one year. Traditional Irish Gaelic Children's Songs is a book and CD set. The book features all lyrics and translations for each song, plus outline drawings of each song for kids to color in (and for visual learners). It is an excellent introduction to the Irish language and to traditional Irish singing, for adults as well as children.

"Suantraighe" is a collection of Celtic lullabies, including traditional lullabies in Irish, Manx, and Scottish Gaelic, and in Welsh. It also includes an original lullaby Caera has written in the Irish language, and one poem from early medieval Irish literature, in Old Irish, which she has set to music with voice and harp.

"Éist le mo Scéal" is a collection of original songs, written and arranged by Caera, in English and in Irish. This album shows Caera's growth since her first albums in 2004, as a songwriter, composer, arranger, and harper. It features songs about Caera's personal experiences, including child abuse and other domestic violence, sexual assault, homelessness, family alcoholism, and other potent issues in the lives of many women, and many people in general. It also features songs from Caera's spiritual side, which are not specific to any one religion, but show the strength to move through these issues and see the beauty available in life.

For more information or booking, please call (617)335-6063, or email caerasinger[at]gmail.com (change [at] to @ to send email; it was written that way to avoid spam). Caera's electronic press kit is available online at www.sonicbids.com/caera.

You need to be a member of Caera to add comments!

Comment by AZureGray on January 24, 2011 at 1:06am
Thank you so much for inviting me. I tried to teach myself Gaelic but new realize I need a teacher.