We make quite a lot of varied items. Our products section is broken up into several categories 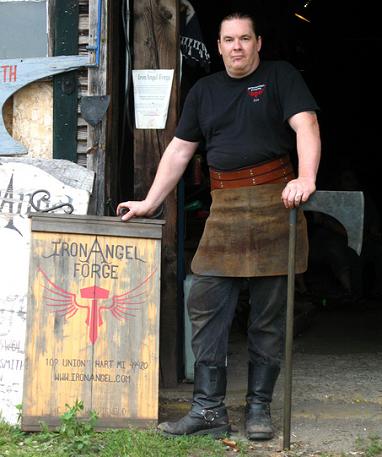 HART -- John and Callee Griswold couldn't go back in history. So, they are recreating it -- one sword, one shield and one crossbow at a time.

It is laborious work, but the Griswolds, owners of Iron Angel Forge in Hart, have a passion for times gone by and create replications of iron-based items with a hammer and anvil at their 125-year-old shop.

Iron Angel is the oldest continually operating blacksmith shop in the state of Michigan that we are aware of," said Griswold. The building is on the State Historic Register.

The couple and their blacksmith craft are an integral link between past and present for history buffs who engage in period re-enactments. From the Civil War era to the Dark Ages Living History Re-enactments, and then to the Vikings and even the Romans, the Griswolds' historically accurate weapon and tool reproductions are standard equipment.

Besides ancient weapons, the Griswolds' creations include tent stakes, cooking tripods and other period-specific necessities. They bring a portable forge to shows and re-enactments, where they sell merchandise, craft custom orders and perform emergency repairs for combatants who sometimes fight with real -- but unsharpened -- steel swords
while wearing armor.

Their replicas have sold to historical re-enactment enthusiasts as far away as Australia and New Zealand.

The Griswolds met at a re-enactment several years ago.

"I was one of those irritating kids who read history for fun," said John Griswold, who confessed to an early interest in blacksmithing. "I destroyed my mom's charcoal grill trying to learn this craft."

So, in early 1984, Griswold made his way over to an old-fashioned forge operation in the Hart Industrial Historic District.

"I started bugging the owner to teach me," he said. "He was a crotchety old German guy ... we got along great."

John Griswold purchased the forge in 1999 and renamed it Iron Angel Forge.

The building itself has its own legacy; originally built for a blacksmith/carriage wright, it has been passed down from owner to apprentice for as far back as anyone could remember.
John Griswold apprenticed under, and eventually bought the building from, Harold Nelson.
"When Harold bought the place it was two weeks away from a wrecking ball," said John Griswold.

The bulk of their business is diversified custom orders -- a must to keep pace with the market and competition from imports, said Callee Griswold. To extend their reach, Callee Griswold learned to craft beads used for trade and decoration through at least the 9th century.
A friend, Laura Love, helps with production and sales. Love's professional seamstress skills also have proved to be invaluable for replicating the historic garb needed to participate in re-enactments.

"If somebody needs something, we can probably make it," said John Griswold. "It's just a matter of time."

That might be an understatement; smithing is a time-intensive avocation. John Griswold spent 110 hours crafting a sword for the armor exhibit in the Muskegon Museum of Art. He used Damascus laminate steel, a method of layering hard and soft steel together to create a hard, flexible blade.

John Griswold does 95 percent of his blacksmithing work with a hammer and anvil. Every shape of the anvil serves a unique purpose for creating objects from steel.

Griswold's devotion to his art frequently causes him to get lost in the creativity of his projects.
"He will work 18 to 20 hours straight on a project," said Callee Griswold. "We have to tell him 'it's time to eat' or 'it's time to sleep.'

"All of this is really an act of love for the craft. It's not something we make money at. That's why we all have second jobs. It is a constant struggle, but we struggle because of our love of the craft."

All three are dedicated to not only maintaining the historic forge, but making the improvements it so desperately needs. A new roof and siding are at the top of the list.

"We are all lovers of history," said Laura Love. "We want to properly restore the building so it can stay here another 125 years. Each generation leaves a little of themselves here in the forge. We just want to leave our own mark."

Considered a master of his craft by everyone but himself, John Griswold still is searching for long-forgotten techniques or trade secrets to add to his extensive library of metal-working books. All three continually hunt for out-of-print books, manuals, historic notes, anything they can lay their hands on.

"You never know when someone might have shared a helpful trick or technique," said Callee Griswold. Unlike many master craftsmen, the Griswolds don't hide the secrets of their trade from the students they tutor.

"If we don't show people how, this craft will die," John Griswold said.

Hot From the Anvil 7 Replies

Areas in the Crossbow Shop 12 Replies

You need to be a member of Iron Angel Forge to add comments!

Comment by Dept of PMM Artists & things on November 23, 2010 at 10:20pm
Holiday Specials for 2010Main site • IronAngel Forge test site
Iron Bud Roses - $20 postage paid any where in the continental US.

Copper Bud Roses - $20 postage paid any where in the continental US.

More soon! Email us at ironangelforge at gmail dot com to order.

All content and copy on all pages of this site ©2010 IronAngel Forge.
http://ironangelforge.com/products/holiday2010/