Had to have my Lucy put to sleep recently. She was with us for nearly 10 years and we tried the whole time to keep her healthy. She was allergic to flea bites and would end up with secondary infections, hair loss and just plain miserable. Every summer she would get out of the house and be so happy, but by the end of the summer when I was able to catch her, she was a mess.

The first time it happened she nearly died, I was sick with worry until we caught her and got her well again. It would usually take a little while to tame her again as she would always become a bit feral. Once she was tamed she was an absolute sweetheart, but scared of everything, noises, people, movements. I had developed special hand signals that she understood so that I could interact with her.

This summer she was out again and unfortunately she was not quite the same when she came in. She was even sleeping in her litter box, waste and all. When the vet said that Lucy's quality of life wasn't there... I knew it was time.

On top of the care of Lucy, my husband who is a disabled Vietnam vet is terminal and I blame Agent Orange as he had that stuff dumped on top of him while he was in the jungle! With the care of my husband there just wasn't the time to devote to Lucy. I couldn't put her into a rescue situation because with all her quirks she would be too traumatized.

When I left the vet I was in shock, to say the least. I found myself at a coffee shop and was surprised by that because I was headed home. While waiting for my order I realized that I was thinking of Lucy when she was younger, playing, like she was saying she was ok now.

Then I stopped into my favorite metaphysical shop, Mystery Gallery, just down the street from my house. Upon entering I kept hearing "angel-kitty" dancing through my brain. I searched all through the angel area and found no cat. So I hunted the whole store, thoroughly! Way in the back, in the bottom of a window-case was a gray kitten fairy. It didn't have the same markings as her but it was close, and the fur wasn't as long either. As soon as I bought it I began to feel better. It now sits in the china hutch in the dining room, between the front room and the kitchen so I pass her multiple times a day.

This is Lucy and the statue... 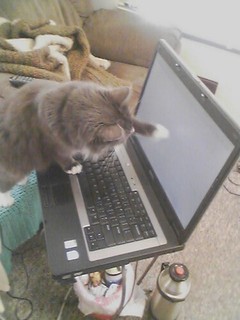 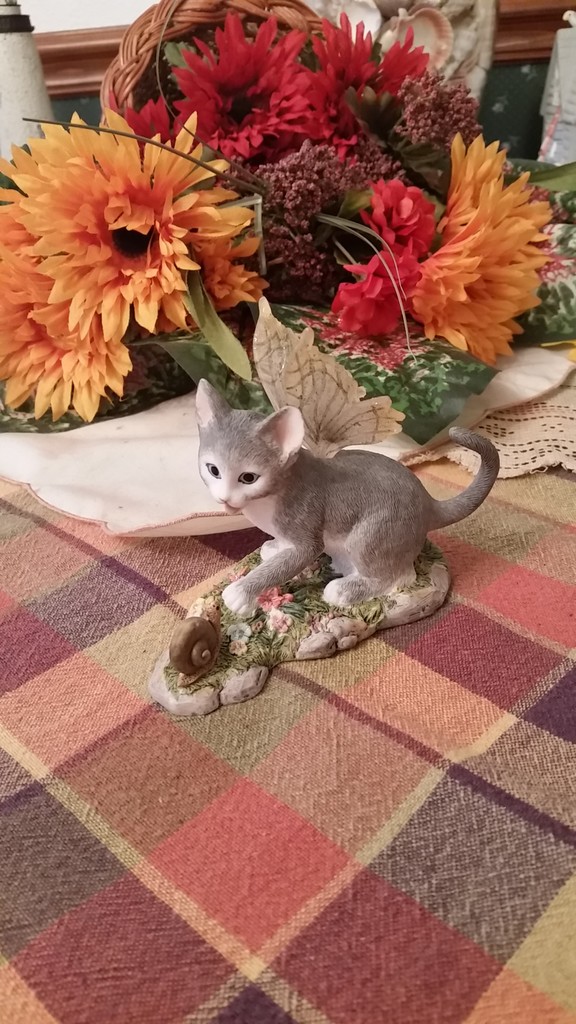