The harp is a multi-stringed instrument which has the plane of its strings positioned perpendicular to the soundboard. Note that our friend, the Hammer Dulcimer, is a multi-stringed instrument whose strings are parallel to the soundboard and are struck not plucked. Therefore placing it in a separate family. All harps have a neck, resonator, and strings. Some, known as frame harps, also have a forepillar; those lacking the forepillar are referred to as open harps.

Various types of harps are found in Africa, Europe, North, and South America, and in Asia. In antiquity, harps and the closely related lyres were very prominent in nearly all cultures. The oldest harps found thus far have been uncovered in ruins from ancient Sumer. The harp also predominant in the hands of medieval bards, troubadors and minnesingers, as well as throughout the Spanish Empire. 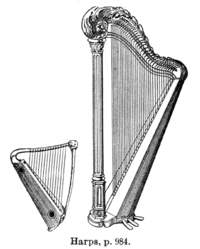 A medieval harp (left) and a single-action pedal harp.

Harps were most likely independently invented in many parts of the world in remote prehistory. The harp's origins might lie in the sound of a plucked hunter's bow-string or the strings of a loom.

A type of harp called a 'bow harp' is nothing more than a bow like a hunter's, with a resonating vessel such as a gourd fixed somewhere along its length. To allow a greater number of strings, harps were later made from two pieces of wood attached at the ends: this type is known as the 'angle harp'. They can also come in different colors. The strings, possibly made of hair or plant fiber, were attached to a diaphragm at one end, and tied around the string arm or neck at the other. The strings were tuned by sliding or rotating the knots that held them. Detail of a wall painting from an XVIIIth dynasty tomb at Thebes, showing a musician with a type of arched harp. Oriental Institute, Chicago. 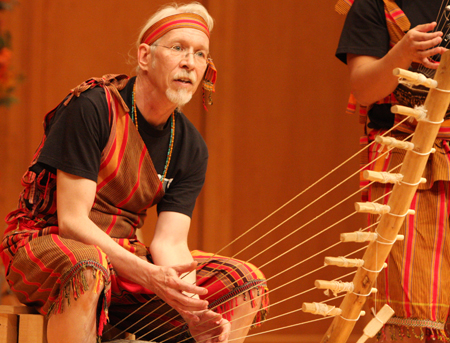 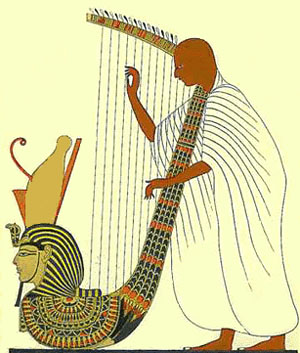 The harpist chants laudation of the Pharaoh before the god Shu,
symbolizing the space between Heaven and Earth, who wears an ostrich feather headdress
and holds a scepter Was, symbolizing the power and domination, and the sign of life – The Key Ankh.
Tomb of Pharaoh Ramesses III, XX Dynasty, 1185-1070 BC, The Valley of the Kings, Western Thebes.
Sketch after James Bruce, Travels to Discover the Source of the Nile, 1813.

The oldest depictions of harps without a forepillar are from 4000 BC in Egypt the sumerian harp of Ur 3500 BC,and 3000 BC in Persia. Other ancient names for harps include magadis and sambuca.

Angle harps and bow harps continue to be used up to the present day. In Europe, however, a further development took place: adding a third structural member, the pillar, to support the far ends of the arch and sound box. The 'Triangular Frame harp' is depicted in manuscripts and sculpture from about the 8th century AD, especially in North-West Europe, although specific nationalistic claims to the invention of the triangular frame harp cannot be substantiated. The graceful curve of the harp's neck is a result of the proportional shortening of the basic triangular form so that the strings are equidistant. If the strings were proportionately distanced, the strings would be farther and farther apart.

An Anglo-Saxon manuscript known as Caedmon's Metrical Paraphrase of Scripture History, illustrated in the second quarter of the 11th century, shows Jubal of Genesis playing a handsome harp of this kind. This harp appears to be at least three feet in height. It rests on his right shoulder, and he is clutching the bottom of the soundbox with his knees.

By the 12th century, manuscript illustrations depict harps of a more advanced design. The neck of the harp is now curved so as to make the middle strings a little shorter, a feature of all later designs that gives the strings a more uniform tension.

King David, as Keeper of Order in the realm of sounds, is often shown tuning the harp with one hand while plucking the strings with the other.

Detail of King David from the Hunterian Psalter, ca. 1170. He holds a tuning key in his left hand. Ms. U.3.2, folio 21v. University Library, Glasgow.

"The sound is all in the neck, Westling says. The graceful curved neck of every harp has the job of producing the sweetest note possible. That harmonic curve between the neck and the base has to be just right. If the distance is too long, tightening the string to the right pitch would break it. Too short of a distance, and good luck tuning that string.
The goal is to get the right note to fit the right shape -- and when your customer wants a certain shape or size of a harp that fits their body or their hand, each design is different than the last. "-Making Wood Sing by Jake Wilhelm

European harps in medieval and Renaissance times usually had a bray pin fitted to make a buzzing sound when a string was plucked. By the baroque period, in Italy and Spain, more strings were added to allow for chromatic notes; these were usually in a second line of strings. At the same time single-row diatonic harps continued to be played. 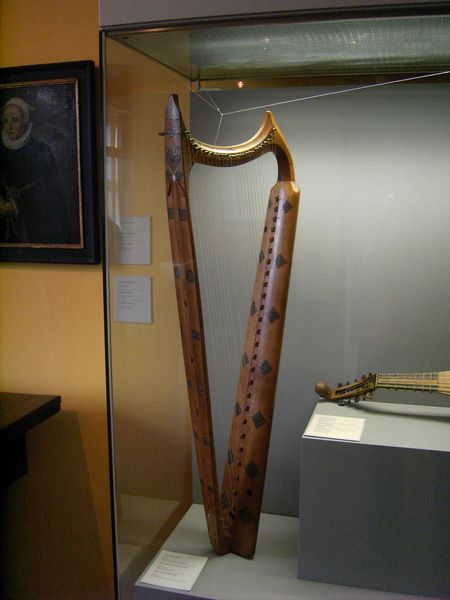 Bray pins are the ancient crooked pegs which both secure the string into its position on the soundboard and act as a wedge against which the plucked string vibrates. They can be set to produce a range of timbral effects from a soft hum to a loud snarl. Often described by modern listeners as having an "Eastern" tone color, the bray harp was the characteristic harp sound of the Renaissance. The brays can be tuned aside when the buzzing is not desired, and the harp regains its original timbre.

"...the strings of the harp also rattle and crackle..."

Tune in next time for the Lyre and many more!