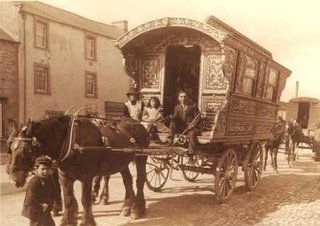 The first gypsies claimed to be the Christian nobility of Egypt, who had abandoned their possessions in order to retain their faith when the Muslims gained power. They were believed for a good period.
However, linguistic evidence strongly demonstrates that they actually originated in India, and moved west, migrating through the middle east into Europe. Although the Gypsies call themselves 'Rom' and their language is known as'Romani', the Romani language has nothing in common with the language known as Romanian (which is a Romance language, derived from Latin and kin to French, Spanish, Italian, etc.). Romanibeen shown to be closely related to groups of languages and dialects (such as Hindi, Gujarati, Marathi and Cashmiri) still spoken in India and of the same origin as Sanskrit.

They were often described as dark-skinned magicians, entertainers, smiths, horsebreakers and other skilled tradeworkers. There is a good possibility that they originated belly dancing.

They lived in tents. Ggypsy wagons are a recent introduction. The wagons date from the late 18th early 19th century. Before that, they travelled by foot and horseback, setting up tents by night. The classic gypsy caravan wagons were usually built by commercial carriage shops for the gypsies, since they took a lot of woodworking and other equipment.

Reliable period info on gypsies is sadly lacking- the only people writing about them were the ones who wanted rid of them at all cost. I think it was in the fifteenth century that the pogroms against them really got rolling...Because gypsies have remained very secluded and secretive, cultural "tainting" has been comparatively low, and modern practices may well reflect medieval practices.

In France it was thought that these same people came from Bohemia and thus they were called 'Bohemes'.... [thus began the English word "bohemian"]. There are Elizabethan laws against dressing or acting "as an Egyptian," which from the descriptions seem to be what we would call 'gypsies.' It is quite possible that the word "gypsy" came into use as an abreviation of "Egyptian" somewhat later than the actual arrival of the Rom in England.
The Romnichels, or Rom'nies, began to come to the United States from England in 1850. Their arrival coincided with an increase in the demand for draft horses in agriculture and then in urban transportation. Many Romnichels worked as horse traders, both in the travel-intensive acquisition of stock and in long-term urban sales stable enterprise. After the rapid decline in the horse trade following the First World War, most Romnichels relied on previously secondary enterprises, "basket-making," including the manufacture and sale of rustic furniture, and fortune telling.

The Rom arrived in the United States and Canada from Serbia, Russia and Austria-Hungary beginning in the 1880s, as part of the larger wave of immigration from southern and eastern Europe in the late 19th and early 20th centuries. Primary immigration ended, for the most part, in 1914, with the beginning of the First World War and subsequent tightening of immigration restrictions. Many in this group specialized in coppersmith work, mainly the repair and refining of industrial equipment used in bakeries, laundries, confectioneries and other businesses. The Rom, too, developed the fortune-telling business in urban areas.

The Ludar, or "Rumanian Gypsies," emigrated to North America during the great immigration from southern and eastern Europe between 1880 and 1914. Most of the Ludar came from northwestern Bosnia. Upon their arrival in North America they specialized as animal trainers and show people, and indeed passenger manifests show bears and monkeys as a major part of their baggage. Only a handful of items covering this group have been published, beginning in 1902. The ethnic language of the Ludar is a form of Romanian. They are occasionally referred to as Ursari in the literature.

Gypsies from Germany, generally referred to in the literature as Chikeners (Pennsylvania German, from German Zigeuner), sometimes refer to themselves as "Black Dutch." (While the term "Black Dutch" has been adopted by these German Gypsies, it does not originate with this group and has been used ambiguously to refer to several non-Gypsy populations.) They are few in number and claim to have largely assimilated to Romnichel culture. In the past known as horse traders and basket makers, some continue to provide baskets to US Amish and Mennonite communities. The literature on this group is very sparse and unreliable.

The Hungarian (or Hungarian-Slovak) musicians also came to this country with the eastern European immigration. In the United States they continued as musicians to the Hungarian and Slovak immigrant settlements, and count the musical tradition as a basic cultural element.