Memento mori is a Latin phrase translated as "Remember your mortality", "Remember you must die" or "Remember you will die". It refers to a genre of artworks that vary widely but which all share the same purpose: to remind people of their mortality, an artistic theme dating back to antiquity. 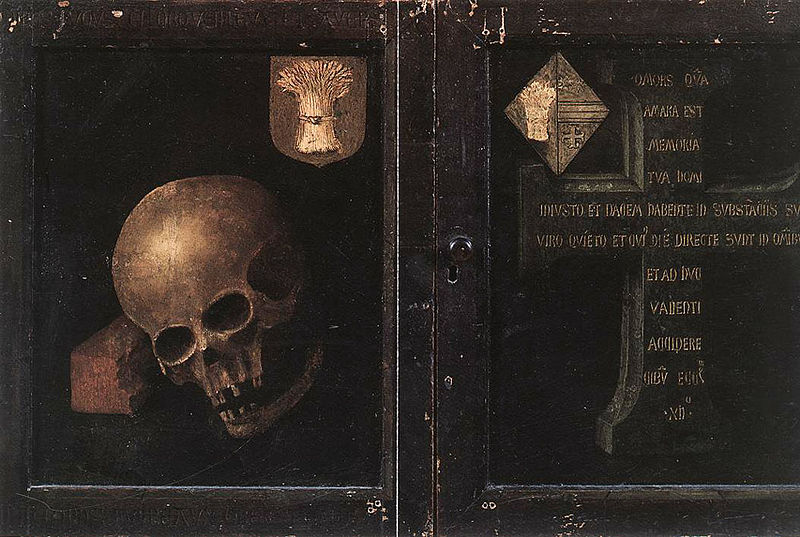 Popular belief says the phrase originated in ancient Rome: As a Roman general was parading through the streets during a victory triumph, standing behind him was his slave, tasked with reminding the general that, although at his peak today, tomorrow he could fall, or — more likely — be brought down. The servant is thought to have conveyed this with the warning, "Memento mori".

It is further possible that the servant may have instead advised, "Respice post te! Hominem te esse memento! Memento mori!": "Look behind you! Remember that you are but a man! Remember that you'll die!", as noted by Tertullian in his Apologeticus. 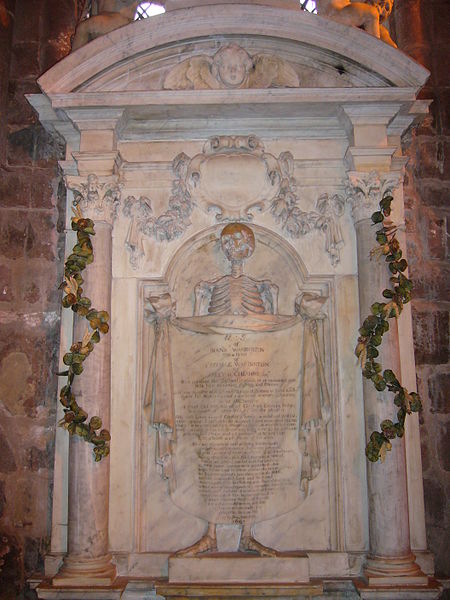 The thought came into its own with Christianity[citation needed], whose strong emphasis on Divine Judgment, heaven, hell, and the salvation of the soul brought death to the forefront of consciousness. Most memento mori works are products of Christian art[citation needed], although there are equivalents in Buddhist art. In the Christian context, the memento mori acquires a moralizing purpose quite opposed to the Nunc est bibendum theme of Classical antiquity. To the Christian, the prospect of death serves to emphasize the emptiness and fleetingness of earthly pleasures, luxuries, and achievements, and thus also as an invitation to focus one's thoughts on the prospect of the afterlife. A Biblical injunction often associated with the memento mori in this context is In omnibus operibus tuis memorare novissima tua, et in aeternum non peccabis (the Vulgate's Latin rendering of Ecclesiasticus 7:40, "in all thy works be mindful of thy last end and thou wilt never sin.") This finds ritual expression in the rites of Ash Wednesday, when ashes are placed upon the worshipers' heads with the words "Remember Man that you are dust and unto dust you shall return."

The most obvious places to look for memento mori meditations are in funeral art and architecture. Perhaps the most striking to contemporary minds is the transi, or cadaver tomb, a tomb that depicts the decayed corpse of the deceased. This became a fashion in the tombs of the wealthy in the fifteenth century, and surviving examples still create a stark reminder of the vanity of earthly riches. Later, Puritan tomb stones in the colonial United States frequently depicted winged skulls, skeletons, or angels snuffing out candles. These are among the numerous themes associated with skull imagery.

Another example of memento mori is provided by the chapels of bones, such as the Capela dos Ossos in Évora or the Capuchin Crypt in Rome. These are chapels where the walls are totally or partially covered by human remains, mostly bones. The entrance to the former has the sentence "We bones, lying here bare, await for yours."

The famous danse macabre, with its dancing depiction of the Grim Reaper carrying off rich and poor alike, is another well-known example of the memento mori theme. This and similar depictions of Death decorated many European churches.

Timepieces were formerly an apt reminder that your time on Earth grows shorter with each passing minute. Public clocks would be decorated with mottos such as ultima forsan ("perhaps the last" [hour]) or vulnerant omnes, ultima necat ("they all wound, and the last kills"). Even today, clocks often carry the motto tempus fugit, "time flees". Old striking clocks often sported automata who would appear and strike the hour; some of the celebrated automaton clocks from Augsburg, Germany, had Death striking the hour. The several computerized "death clocks" revive this old idea. Private people carried smaller reminders of their own mortality. Mary, Queen of Scots, owned a large watch carved in the form of a silver skull, embellished with the lines of Horace.

A version of the theme in the artistic genre of still life is more often referred to as a vanitas, Latin for "vanity". These include symbols of mortality, whether obvious ones like skulls, or more subtle ones, like a flower losing its petals. See the themes associated with the image of the skull.

After the invention of photography, many people had photographs taken of recently dead family members. Given the technical limitations of daguerreotype photography which required long exposure times, this was one situation where the portrait subject remained quite still.
Memento mori was also an important literary theme. Well-known literary meditations on death in English prose include Sir Thomas Browne's Hydriotaphia, Urn Burial and Jeremy Taylor's Holy Living and Holy Dying. These works were part of a Jacobean cult of melancholia that marked the end of the Elizabethan era. In the late eighteenth century, literary elegies were a common genre; Thomas Gray's Elegy Written in a Country Churchyard and Edward Young's Night Thoughts are typical members of the genre.

Apart from the genre of requiem and funeral music, there is also a rich tradition of memento mori in the Early Music of Europe. Especially those facing the ever-present death during the recurring bubonic plague pandemics from the 1340s onward tried to toughen themselves by anticipating the inevitable in chants, from the simple Geisslerlieder of the Flagellant movement to the more refined cloistral or courtly songs. The lyrics often looked at life as a necessary and god-given vale of tears with death as a ransom and reminded people to lead sinless lives to stand a chance at Judgement Day. Two stanzas typical of memento mori in mediaeval music are from the virelai ad mortem festinamus of the Catalan Llibre Vermell de Montserrat from 1399:

If you do not turn back and become like a child,
And change your life for the better,
You will not be able to enter, blessed, the Kingdom of God.
To death we are hastening, let us refrain from sinning.

The motto of the French village of Èze is the phrase "Moriendo Renascor" (meaning "In death I am Reborn"), and its emblem is a phoenix perched on a bone.
In the late 16th and through the 17th century Memento mori rings were made. 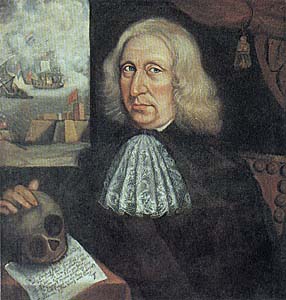 Colonial American art saw a large number of memento mori images due to Puritan influence. The Puritan community in 17th-century North America looked down upon art, because they believed it drew the faithful away from God, and if away from God, then it could only lead to the devil. However, portraits were considered historical records, and as such they were allowed. Thomas Smith, a 17th-century Puritan, fought in many naval battles and also painted. In his self-portrait, we see a typical puritan memento mori with a skull, suggesting his imminent death.

The poem under the skull emphasizes Smith's acceptance of death:

Why why should I the World be minding, Therein a World of Evils Finding. Then Farwell World: Farwell thy jarres, thy Joies thy Toies thy Wiles thy Warrs. Truth Sounds Retreat: I am not sorye. The Eternall Drawes to him my heart, By Faith (which can thy Force Subvert) To Crowne me (after Grace) with Glory.

Much memento mori art is associated with the Mexican festival Day of the Dead, including skull-shaped candies and bread loaves adorned with bread "bones."
This theme was also famously expressed in the works of the Mexican engraver José Guadalupe Posada, in which various walks of life are depicted as skeletons.