Garlands for the Deaths of English Maidens

Churches are full of history’s cast-offs. As the time-honoured repository of the community’s memories, the local church preserves what would otherwise never have survived to greet us today. And often, it is those everyday items which connect us most vividly to the past.

Nowhere is this more so than in the little village of Minsterley in Shropshire. Holy Trinity, Minsterley, is unusual enough, a brick-built 17th-century structure, finished off with a handful of stone carvings above the windows. The west end feels more like the entrance to an old theatre than to a church, though the gloomy skulls and crossbones tell us what it is really about. The inside too could hardly be more modest, a simple up-and-down church without aisles or crossing, though the surviving woodwork is very fine, as it often is in the Marches.

A London architect – William Taylor – built the church in 1688-9 for Thomas Thynne, 1st Viscount Weymouth, whose female relations had come to live at nearby Minsterley Hall and needed a place to worship. But even they, perhaps, felt it too modest to grace with their grand family memorials. The Thynnes, as far as I can tell, chose to lie elsewhere. 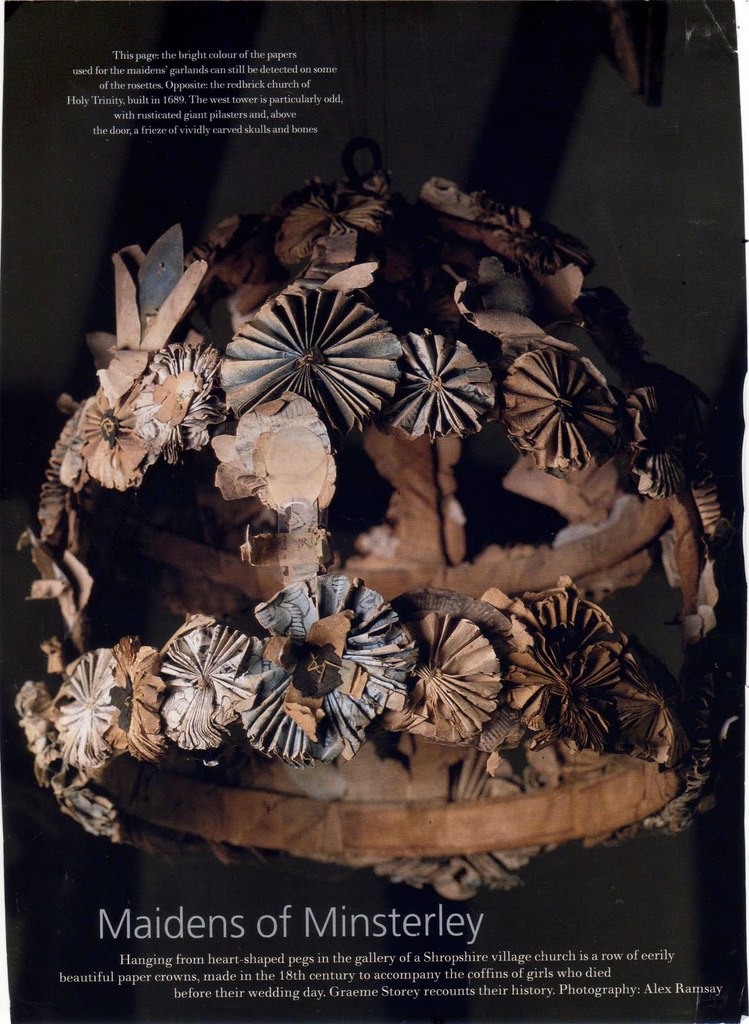 Instead of ancestral vaults and mighty tombs, seven young women have left their lives behind to remind us of mortality. They have bequeathed to us their maiden’s garlands.

As far back as classical times the death of a young woman has been keenly felt and commemorated. A maid who died unmarried, it was believed, had been cheated of the very reason for her existence: to marry and bear children. It was almost a denial of God’s law.

The Ancient Greeks, in a poignant reference to her lost future, placed or carved a vase called a loutrophoros on the woman’s gravestone. It was from a vessel like this that the bride was ritually washed on her wedding night. Our ancestors had a different way of marking the death of an unmarried woman. In England they made her a maiden’s garland, carried before her funeral procession or borne on her coffin. The garland was a crown made of thin hoops of wood, wrapped in white lace.

And to the crown they tied ribbons and gloves and little paper flowers of blue or red. To that they then added real flowers. When the coffin was lowered into the ground, the garland remained in the church, to yellow with age and gather dust.

The explanation offered for the gloves is that they represented a challenge to any who would besmirch the maiden’s reputation or her virginity. Such garlands were once common the length and breadth of the country, from the south coast to Yorkshire. My guess is that they were put together by the girl’s family, a substitute for the dress-making and decoration for the wedding day she never had. Lace, ribbons and gloves were all a part of this. Shakespeare were certainly familiar with the practice. The priest in Hamlet refers to the tradition when he speaks of Ophelia’s burial, spared the ignominy of a suicide’s unconsecrated grave:

Yet here she is allowed her virgin crants, Her maiden strewments, and the bringing home Of bell and burial.

Only the 2nd Quarto of the play had this word; the 1st Folio and later editors substitute the phrase “virgin rites”, making the lines easier to understand, but losing the original meaning. It was Dr Johnson who was the first to explain the word “crants”, adding that they were still the practice in rural villages in his day. By the time Shakespeare’s Victorian editors came along, however, the custom had largely died out.

In most cases the garlands were cleared away by tidy Victorians, or did not survive an ecclesiastical spring clean. Divorced from their occasion, they became no more than waste paper.

The girl’s garland was probably fixed to her family’s pew, and no doubt they were often thrown out when the family ceased to rent it, or when the pews were replaced. 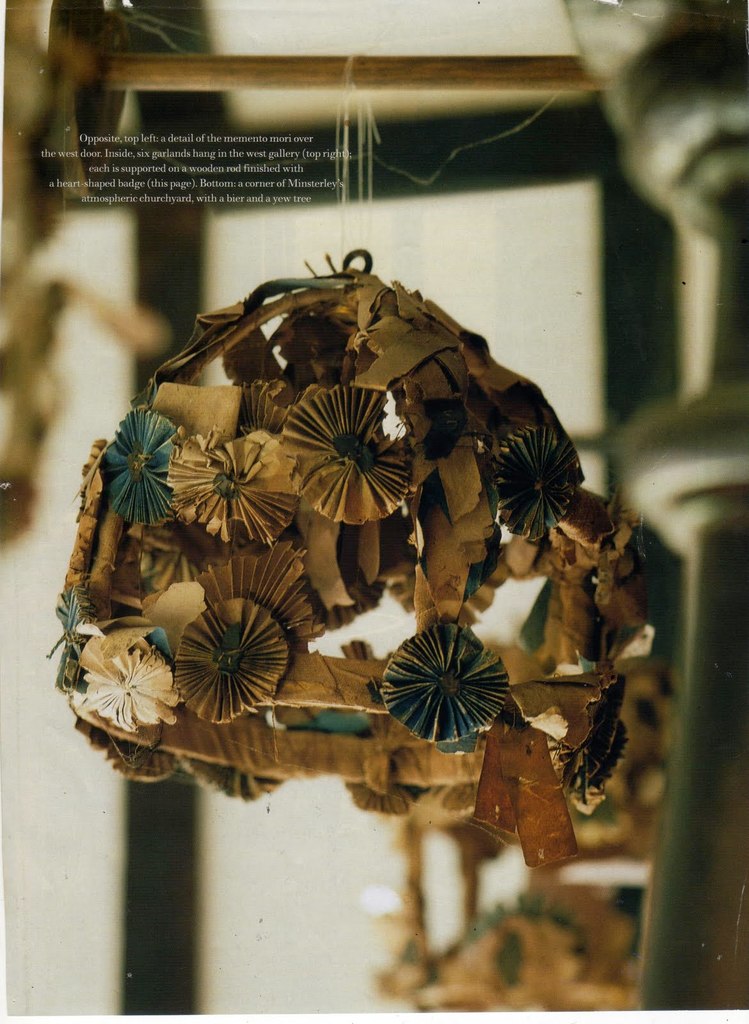 In some places, however, they have survived, a remarkable reminder of burial customs long put by. One survives at Astley Abbots, in Shropshire, dated 1707, and a further two at Ilam in Staffordshire. One village – Abbotts Ann in Hampshire – has continued the tradition, though all their garlands are much later than the ones at Minsterley.

The church at Minsterley has no less than seven such crants. Six of them hang on little wooden pegs, high up on the gallery at the west end of the church. Each peg is finished off with a little wooden heart, bearing the girl’s initials and the date of her death. All of the surviving garlands date from the first half of the 18th Century.

One of the crants, however, has been brought down from its perch and now stands forlornly in a glass case, not so much yellow as brown with age.

The Minsterley garlands have recently been conserved, and an imitation one made to show what the garlands were like when they were new.