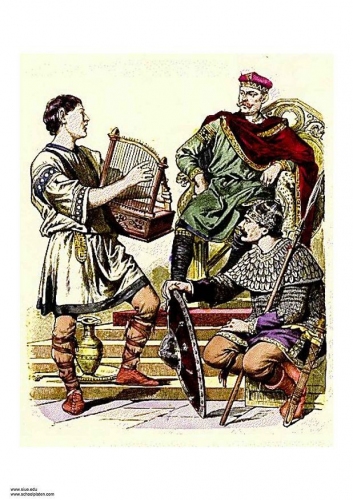 Troubadours
There were two types of Medieval Musicians - the Minstrels and the Troubadours. A troubadour was originally a travelling musician. The early Troubadours travelled from one village to the next and many also travelled abroad.

Troubadours become the elite
The role of the troubadours changed to part of an elite society of royalty and nobles. These elite Troubadours originated as aristocratic poet and musicians of Provence, France. Travel in the Middle Ages, prompted by the Crusades, led to a new and unprecedented interest in beautiful objects, elegant manners, poetry and music. Many troubadours were nobles and knights who had joined the Crusades. The aristocratic troubadours were poets who originated in the south of France where they wrote the lyrics in Provencal (langue d'oc). The troubadours of the north of France wrote in French (langue d'oil)and were called called trouvères. The poetry of the troubadours and the trouvères was invariably linked with music. These elite troubadours even included nobility such as the King of Navarre, the King of Spain and King Richard the Lionheart of England. Richard the Lionheart was the son of Eleanor of Aquitaine who was one of the greatest patrons of Music and the Troubadours of the Middle Ages.

King Richard I of England (the Lionheart)

Jongleurs
The jongleurs were often collaborators or assistants of troubadours or trouveres. Jongleurs gained a reputation of itinerant entertainers of the Middle Ages in France and Norman England. Their repertoire included extravagant skills in dancing, conjuring, acrobatics, and juggling. The Jongleurs also played a part in singing, and storytelling. Many were skilled in playing musical instruments, although their skills were not greatly recognised or rewarded.