Had some bone parts and seeing many doing the Elder Runes. I choose to find other types to make. 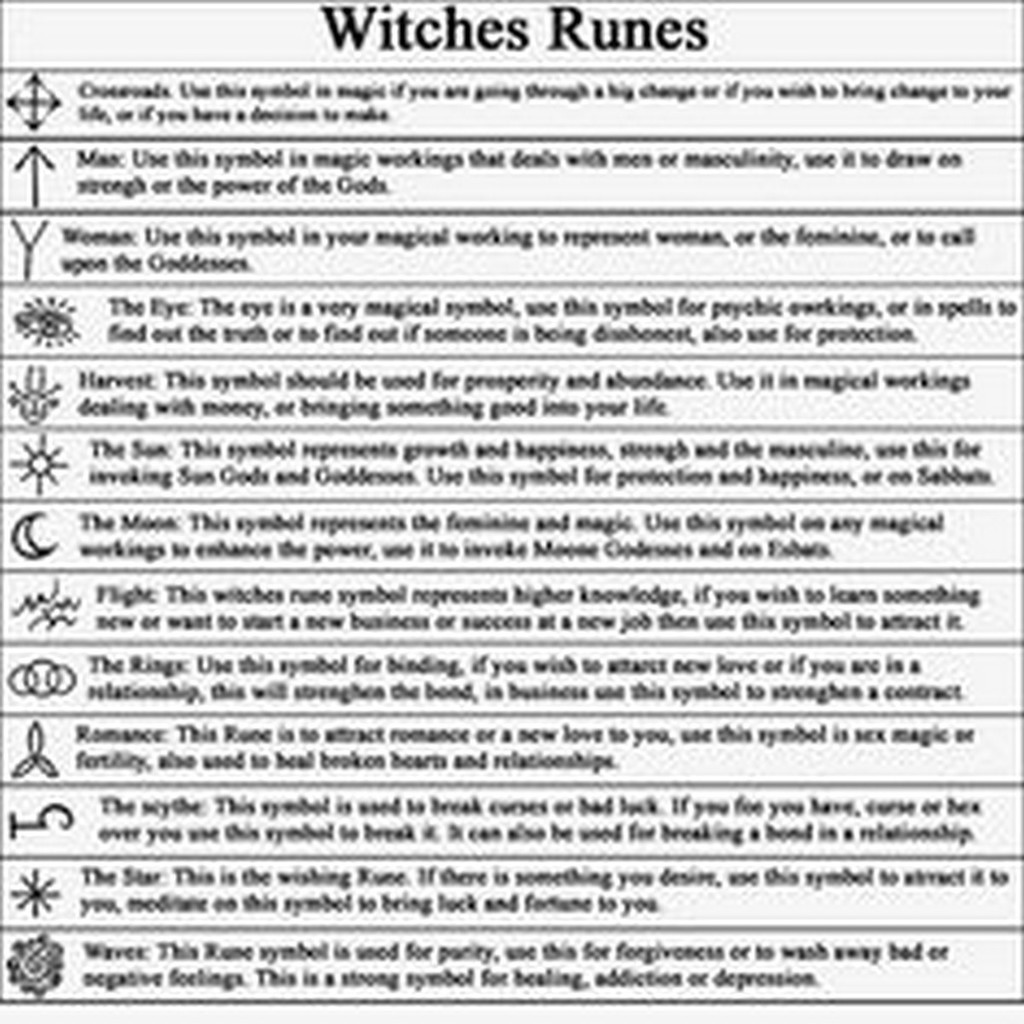 Which has a total of 13. I choose Beef Bones to cut into primitive tiles and burn inscribe the symbols upon them. Also sewed up a soft leather draw string bag to put them into. I also have 2nd set smaller in chicken bone as well I am doing at this time.

Then I found that there is a 8 rune set as well.

The key to the Rune Stones

Crescent moon, marked with four splats, indicating the Moon's phases. This stone in the leading position relates to any uoman in a question, or wives, childbirth or conception, if that is the matter enquired about. It also forecasts changes in position, due to happen within twenty-eight days, if the stone is in the leading position. It often denotes a visit abroad. The true meaning of the rune can be arrived at by studying the rune that is nearest to it in a cast. If the nearest stone is favourable, the coming changes will be favourable.

Rune stone marked with interlocking rings. This has to do with the successful outcome of all loue and maniage questions. When it is the leading rune, it denotes a speedy engagement, marriage, or successful love affair. When leading, it is affirmative to the question: 'Does he (or she) love me?'

Rune stone with crossed spears. When this is the leading rune, it signifres strife and quarrels. It also stands for a sudden occurrence of an upsetting nature. Often it represents some person who has, or will, quarrel with the enquirer. If a member of the armed forces is the enquired, it could mean sudden promotion. If it lies next to afortunate stone it means the healing of a quarrel. If it comes up with the Loae stone, it means the healing of aromance that has broken off, or a revived romance. For health questions this rune denotes a swift reclaer] after illness or accident.

Rune stone with curling wave design. This stands for relatiaes, their affairs, and the effect the affairs of kinfolk have on their enquirer. When near the San stone it forecasts a long journey, often abroad, for the enquirer. Near the Moon stone it presages a journey for a relatiae, When it lies near to the Loae stone, it forecasts a
romance that could take the enquired abroad.

Rune with three birds in flight. It represents sudden \/ news of an unexpected nature. lf a teading rune , it could change the wholc of one's liJe, often for the bstter. " Wh.ther leading or not, when it lies with fortunate stones, it symbolizes documents or writings that bring jo1, also good news frorn distant friends and associates.

This is a Lucky stone, representing an 'ear of corn', the sign of plentlt. As a leading stone this is the luckiest sign of all, denoting a happy and prosperous outcome of the matter enquired about. It presages the expansion of all things, mone!, luck, social adaancement, and a time of prosperity. Lying with the Loue stone it signifies a wealthy marriage!With the Saz stone, a brilliant career. With the
Waae stone, success in distant countries.

A Black rune stone cut like an H. When the leading stone, it denotes losses, grief, and misfortunes in general, partings, and sometimes bereaoements. It should neaer be read alone, unless it is the onll stone in the cast with a s2mbol showing. The stones lying near to it should be read, for these often mitigate what at first looks to be misfortune. For instance, if this stone lies with the Moon stone, it
would indicate unhappiness'that would change within twentyeight days to something better.

flow to Cast the Rune Stones

Take the eight stones in your right hand; shake them up like dice, while thinking of the question you wish to ask, then cast the Runes away from you. Only the Runes that have the s2mbols uppermost should be read. The ones that fall Jace downwards are out and have no meaning.
The Rune stone farthest away from you is the leading stone and the most important. The others decrease in importance as they fall nearer to you.
Only the stones that show a symbol have any meaning. If one falls on top of another and both show a sltmbol, those two stones carry the answer.
Keep your questions simple; if you ask one and cast and nosymbols show, this indicates that the time is not right. Do not cast again for seuen days.
Never cast the Runes for fun, or if you know the qnsuer; remember they are an ancientform oJ diuination and not a game.
When casting for yourself , )ou are the enquirer; when casting for another,let them throw the stonesbutyou read them.
To cast the Runes for someone not present, concentrate on their problem, then cast and read the stones as if you were the enquirer.
Don't try to complicate your readings by asking nebulous questions such as, 'Shall I be happy?'; but rather, 'If I do so and so, will it bring me happiness?' Remember, the Runes are as old as time, so do not expect that you will be able to find a 'long story' at first. Concentrate on simple questions to begin with, and you will soon find that they will tell you their own story in their own way.
Neanlend your Runes to another person, because if you do, they will neaer again tell a true slor7. Remember, they were ritualized for 1ou alone.
Finally, keep your Rune stones in a little velvet or suede bag, which can be embroidered with your magical name, in one of the magical alphabets, or a sigil which is pleasing or powerful to you.

Also another set of ten has been found also.  I have PDF for these as well. 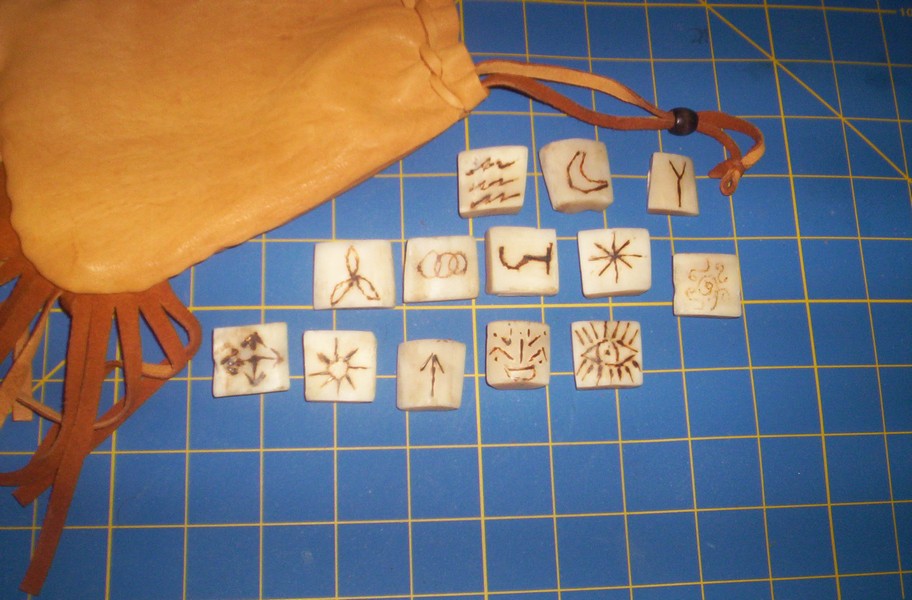 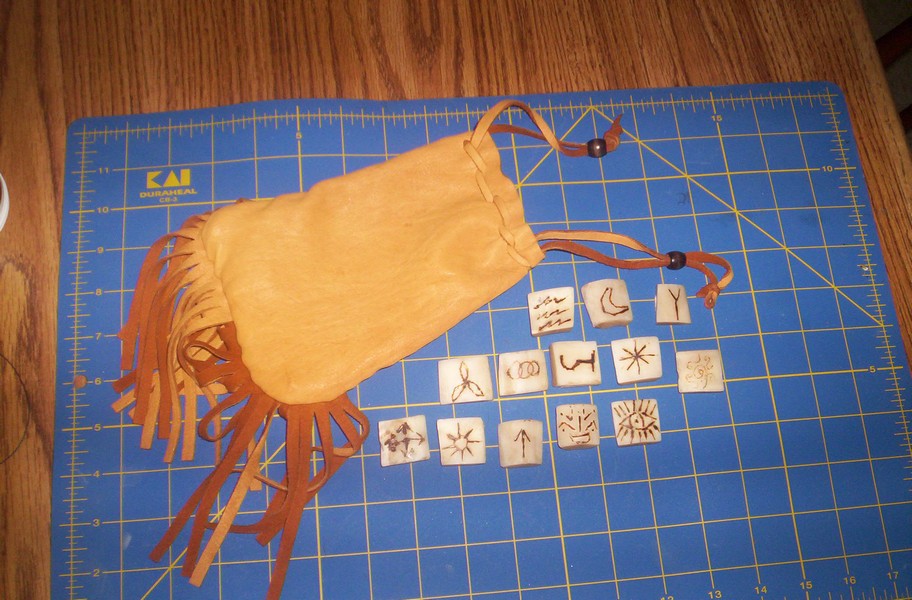 By creating a set of stones with symbols that are significant to you, you can make your own divinatory tool to use for guidance and inspiration. The instructions below are for a simple set using a group of thirteen stones. You can change any of them you like to make the set more readable for you, or you can add to or subtract any of the symbols you wish -- it's your set, so make it as personal as you like.

We're going to designate each stone as being representative of the following:

Mark each stone with a symbol that indicates to you what the stone will represent. You can use astrological symbols for the planetary stones, and other symbols to signify the four elements.

Place the stones within the cloth and tie it shut, forming a bag. To interpret messages from the stones, the simplest way is to draw three stones at random. Place them in front of you, and see what messages they send. Like reading Tarot cards, and other forms of divination, much of lithomancy is intuitive, rather than specific. Use the stones as a meditation tool, and focus on them as a guide. As you become more familiar with your stones, and their meanings, you'll find yourself better able to interpret their messages.

For a more complex method of creating stones, and a detailed explanation of interpretation methods, check out author Gary Wimmer's Lithomancy Website.