"Motley's the only wear." Jacques in As You Like It (2.7.34) craves the freedom of speech traditionally granted the court jester, whose costume--multicoloured and patched--proclaimed his eccentricity. Female fools were rare, though there was one "Jane the Fool" mentioned in Queen Elizabeth's accounts.

The fool or jester was a familiar sight in the courts of Renaissance princes and nobles, and some achieved considerable fame. Will Somers used to have rhyming contests with his master, Henry VIII, and after his death had several works written about him. As late as 1676, a book was published on Somers: A Pleasant History of the Life and Death of Will Summers. In Shakespeare's lifetime, Thomas Nashe wrote a play (punning on the season and the name), Summer's Last Will and Testament; and Robert Armin wrote about him.

By Elizabeth's time, the professional, stage fool had become better known. Tarleton*, Kempe and Armin had special parts written for them, the latter two in Shakespeare's plays.

The "natural" fool was someone who was by nature--by birth--foolish; we would say menatally disabled. Poor nutrition and inadequate medical care produced a much larger number of such people than we are accustomed to today, and some of them were lucky, or clever, enough to make a living from their simplicity. It was after all a society that found madness (mental illness) entertaining.

The "artificial*" fool was altogether different. He deliberately acted simplicity, oddity, or eccentricity, in order to entertain, and sometimes indirectly to give advice*: "This is not altogether fool, my Lord," says the disguised Kent to Lear, after the Fool has indirectly pointed out Lear's own foolishness (1.4.153). As Lear's Fool knows, the fool was traditionally given licence to speak out where others had to be silent. 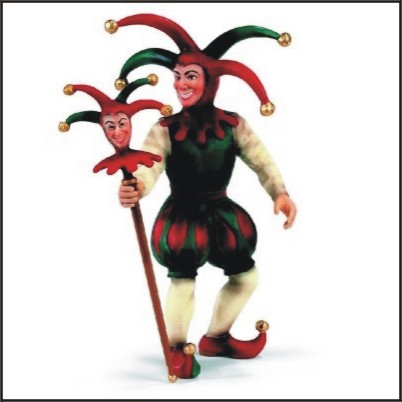