Birthday of the USMC 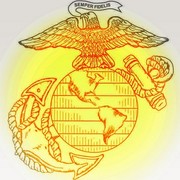 Captain Samuel Nicholas formed two battalions of Continental Marines on 10 November 1775 in Philadelphia as naval infantry.[10] Since then, the mission of the Marine Corps has evolved with changing military doctrine and American foreign policy. The Marine Corps has served in every American armed conflict and attained prominence in the 20th century when its theories and practices of amphibious warfare proved prescient and ultimately formed the cornerstone of the Pacific campaign of World War II.

RSVP for Birthday of the USMC to add comments!

I was born in a bomb crater. My mother was an M16 and my father was the Devil. Each moment that I live is an additional threat upon your life. I eat concertina, piss napalm, and I can shoot a round through a flea’s ass at 500 meters. I am a rough looking, roving soldier of the sea. I am cocky, self-centered, overbearing, and do not know the meaning of fear, for I am fear itself. I am a green amphibious monster, made of blood and guts, who arose from the sea, I travel the globe, feeding on anti-Americans everywhere I go for, the love of Mom and country. I’m a grunt. I’m the dirty, nasty, stinky, sweaty, filthy, beautiful little son of a bitch that’s kept the wolf away from the door for over 235 years. I’m a United States Marine, we look like soldiers, talk like sailors, and slap the shit out of both of them. We stole the eagle from the Air Force, the rope from the Army, and the anchor from the Navy. And on the 7th Day, when God rested, we overran His perimeter, stole the globe, and we’ve been running the show ever since. Warrior by day, lover by night, drunkard by choice, Marine by God. God Bless This Country We call America!

Devil Dog has several oft-disputed explanations, but the tradition has expanded to include the bulldog's association with the Corps, especially as a mascot.
gyrene has dropped out of popular use.
Leatherneck refers to a leather collar formerly part of the Marine uniform during the Revolutionary War period.
Jarhead has several oft-disputed explanations.

Some other unofficial traditions include mottos and exclamations:

Oorah is common among Marines, being similar in function and purpose to the Army's hooah and the Navy's hooyah cries. Many possible etymologies have been offered for the term.
Semper Fi is a common greeting among serving and veteran Marines. It is short for the Marine Corps Motto "Semper Fidelis"
Semper Fi, Mac was the preferred form of the greeting in times past.
Improvise, Adapt and Overcome has become an adopted mantra in many units

The Marines' Hymn dates back to the 19th century and is the oldest official song in the United States armed forces. The Marine motto Semper Fidelis means always faithful in Latin, often appearing as Semper Fi; also the name of the official march of the Corps, composed by John Phillip Sousa. The mottos "Fortitudine" (With Fortitude); By Sea and by Land, a translation of the Royal Marines' Per Mare, Per Terram; and To the Shores of Tripoli were used until 1868. The Marine Corps emblem is the Eagle, Globe, and Anchor, sometimes abbreviated "EGA", adopted in 1868. The Marine Corps seal includes the emblem, also is found on the flag of the United States Marine Corps, and establishes scarlet and gold as the official colors.

Two styles of swords are worn by Marines: the officers' Mameluke Sword, similar to the Persian shamshir presented to Lt. Presley O'Bannon after the Battle of Derna, and the Marine NCO sword. The Marine Corps Birthday is celebrated every year on 10 November in a cake-cutting ceremony where the first slice of cake is given to the oldest Marine present, who in turn hands it off to the youngest Marine present. The celebration includes a reading of Marine Corps Order 47, Commandant Lejeune's Birthday Message. Close Order Drill is heavily emphasized early on in a Marine's initial training, incorporated into most formal events, and is used to teach discipline by instilling habits of precision and automatic response to orders, increase the confidence of junior officers and noncommissioned officers through the exercise of command and give Marines an opportunity to handle individual weapons.

An important part of the Marine Corps culture is the traditional seafaring naval terminology derived from its history with the Navy.

The United States Marine Corps traces its institutional roots to the Continental Marines of the American Revolutionary War, formed by Captain Samuel Nicholas by a resolution of the Second Continental Congress on 10 November 1775, to raise 2 battalions of Marines. That date is regarded and celebrated as the date of the Marine Corps' "birthday". At the end of the American Revolution, both the Continental Navy and Continental Marines were disbanded in April 1783. The institution itself would not be resurrected until 11 July 1798. At that time, in preparation for the Quasi-War with France, Congress created the United States Marine Corps. Marines had been enlisted by the War Department as early as August 1797[31] for service in the new-build frigates authorized by the Congressional "Act to provide a Naval Armament" of 18 March 1794, which specified the numbers of Marines to be recruited for each frigate.

The Marines' most famous action of this period occurred during the First Barbary War (1801–1805) against the Barbary pirates, when William Eaton and First Lieutenant Presley O'Bannon led eight Marines and 500 mercenaries in an effort to capture Tripoli. Though they only reached Derna, the action at Tripoli has been immortalized in the Marines' hymn and the Mameluke Sword carried by Marine officers.

During the War of 1812, Marine naval detachments took part in the great frigate duels that characterized the war, which were the first American victories in the conflict. Their most significant contributions were delaying the British march to Washington, D.C. at the Battle of Bladensburg and holding the center of Gen. Andrew Jackson's defensive line at the defense of New Orleans. By the end of the war, the Marines had acquired a well-deserved reputation as expert marksmen, especially in ship-to-ship actions.

After the war, the Marine Corps fell into a depression that ended with the appointment of Archibald Henderson as its fifth Commandant in 1820. Under his tenure, the Corps took on expeditionary duties in the Caribbean, the Gulf of Mexico, Key West, West Africa, the Falkland Islands, and Sumatra. Commandant Henderson is credited with thwarting President Jackson's attempts to combine and integrate the Marine Corps with the Army. Instead, Congress passed the Act for the Better Organization of the Marine Corps in 1834, stipulating that the Corps was part of the Department of the Navy as a sister service to the Navy. This would be the first of many times that the existence of the Corps was challenged.

Commandant Henderson volunteered the Marines for service in the Seminole Wars of 1835, personally leading nearly half of the entire Corps (two battalions) to war. A decade later, in the Mexican–American War (1846–1848), the Marines made their famed assault on Chapultepec Palace in Mexico City, which would be later celebrated by the phrase "From The Halls of Montezuma" in Marines' hymn. In the 1850s, the Marines would see further service in Panama and Asia, escorting Matthew Perry's East India Squadron on its historic trip to the Far East.

With their vast service in foreign engagements, the Marine Corps played a moderate role in the Civil War (1861–1865); their most prominent task was blockade duty. As more and more states seceded from the Union, about half of the Corps' officers left the Union to join the Confederacy and form the Confederate States Marine Corps, which ultimately played little part in the war. The battalion of recruits formed for the First Battle of Bull Run (First Manassas) performed poorly, retreating with the rest of the Union forces. Blockade duty included sea-based amphibious operations to secure forward bases. In late November, 1861, Marines and sailors landed a reconnaissance in force from the USS Flag at Tybee Island, Georgia, to occupy the Lighthouse and Martello Tower on the northern end of the island. It would later be the Army base for bombardment of Fort Pulaski.