Military History and Warfare: The Crusades: The Battle of Hattin 1187 by Alex 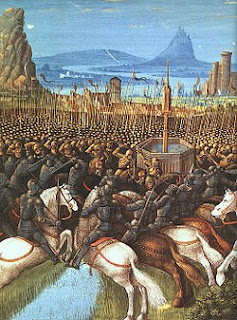 For nearly ninety years, the Franks had held the Holy Land for Western Christendom. The Kingdom of Jerusalem had formed the centrepiece of the Frankish settlements known collectively as ‘Outremer’. However, on the 4th July 1187 the Kingdom was shattered and its army slaughtered in the space of a few hours. The Battle of Hattin represents a decisive moment in both Islamic history and that of the Christendom. United under the banner of the Kurdish sultan Saladin, the armies of Islam dealt the Western colonies a crippling blow from which they never truly recovered.

Repeated violations of the truce made between Saladin and King Guy (in particular an especially ferocious attack upon a Muslim caravan led by Reynald of Chatillon) led Saladin to begin preparations for war in 1187. He ordered troops from throughout his empire to gather at the frontier town of Hauran and assembled the largest army that he had ever commanded. Meanwhile on the Frankish side, equally large preparations for war were also underway. By June some 1,200 fully equipped knights along with ten thousand infantry had been assembled at Acre. Saladin’s forces are believed to have been slightly larger.

On the 1st July, Saladin’s forces crossed the River Jordan into Frankish territory and lay siege to the city of Tiberias. When news came of the invasion, King Guy held counsel with the leading figures of the land. He was advised By Raymond of Tripoli that in the heat of summer, the attacking force would be at a major disadvantage. Therefore the best strategy would be for the Christian army to remain purely on the defensive. This was good sound advice and most of the knights were inclined to accept this strategy. However, King Guy was not a wise man. His ascent to the throne had been opposed by many of the leading barons of the kingdom. His only supporters had been Reynald of Chatillon and Grand Master Gerard of the Knights Templar. They advised that the army should seek out and attack Saladin.

Therefore on the morning of the 3rd July, the Christian army left its comfortable well-supplied camp at Sephoria and marched into the hills. The Bishop of Acre accompanied them bearing pieces of the ‘True Cross’, upon which Jesus was said to have been crucified. Had the army remained at Sephoria, Saladin would probably not have risked an attack. The air was hot and dry with no water supplies along the road. Soon both men and horses were suffering from thirst and exhaustion. Muslim skirmishers were also continuously attacking both the rearguard and vanguard with ‘hit and run’ archers on horseback. By the afternoon, the Franks had reached the plateau immediately above Hattin. Ahead of the Franks lay a rocky hill with two summits known as the Horns of Hattin. Beyond this lay a village and lake. By the afternoon the army could go no further and made camp on the slopes of the hill. The site was supposed to have a well. Unfortunately for the Franks, this well was dried up.

That night Saladin’s men surrounded the Christian army and set fire to the dry scrub that covered the hill. The Franks, already suffering from thirst were further tormented by the hot smoke now pouring over their camp. The Muslim attack began soon after daybreak on the 4th July. They had successfully formed a cordon around the entire Christian army. Desperate for water, the Frankish infantry surged forward down the slope towards the lake. Many were slaughtered or taken prisoner by Saladin’s massed forces. Only the Christian cavalry could hope to turn the tide against the Muslim forces. Saladin ordered his cavalry to assault the hill where King Guy’s red tent remained clearly visible. Despite overwhelming odds, the remaining Frankish horseman on the hill beat back wave after wave of Muslim cavalry. Raymond of Tripoli led his knights in a desperate attempt to break through the surrounding Muslim army. When his men charged, the forces opposing them opened up their ranks to allow them to pass harmlessly. Unable to rejoin the battle, Raymond and his knights withdrew to Tripoli.

With the infantry now largely out of the battle and both horses and men suffering from thirst and heat exhaustion, the remaining Franks fought on. The King’s tent was moved to the summit and his knights gathered around him for a last stand. It was soon over. The Bishop of Acre had been killed and the Holy Cross was in the hands of a Muslim. The surviving Franks were exhausted. Then King Guy and the surviving leading men of the Kingdom were presented before Saladin.

Saladin’s tent had been erected on the battlefield and in it he received King Guy and Reynald. He greeted them graciously and offered the King a goblet of rose-water, cooled with ice brought from Mount Hermon. Guy drank it and passed it to Reynald. By the laws of Arab hospitality to give food or drink to a captive ensured that his life would be safe. Saladin had made no such gesture towards Reynald. Saladin reminded Reynald of his crimes and truce violations. When Reynald replied with insolence, Saladin took a sword and struck off his head. He then reassured Guy that ‘A king does not kill a king’.

Whilst Saladin spared the lives of the Barons of the kingdom, the Templar and Hospitaller prisoners were considered too dangerous to live. Fanatical Muslim ‘sufis’ carried out the executions of the surviving members of the Military Orders. Shortly afterwards, Saladin’s forces began the systematic conquest of the now heavily depleted castles across the Holy Land. After a five-day siege, Jerusalem itself fell to Saladin’s army. The damage was almost complete. If not for the fortunate arrival of groups of Westerners on pilgrimage, all the Crusaders lands would have been conquered. Although King Richard’s Crusade allowed a smaller reconstituted Kingdom to continue, the position of the Franks in the Holy Land was more precarious than ever. Saladin had managed to wipe out the bulk of the Kingdom’s defences in a matter of hours. Despite repeated attempts to rebuild the Christian position in the East, the Battle of Hattin proved to be a blow from which the Kingdom of Jerusalem never recovered.

If you are interested in reading more about the Battle of Hattin have a look at these books;