A starting of a kriss dagger blade. Lost to the shuffle of life and things not of my control. Started at the first year of Mi Mi Renn Faire

The kris or keris is an asymmetrical dagger indigenous to Indonesia, Malaysia, Thailand and Brunei. It is known as kalis in the southern Philippines. The kris is famous for its distinctive wavy blade, but many have straight blades as well. Both a weapon and spiritual object, kris are often considered to have an essence or presence, with some blades possessing good luck and others possessing bad.

Was given a bowie blank no guard nor hilt. Got a steel guard mounted and working upon bamboo scales upon it. Again not pretty yet and in process but getting there. 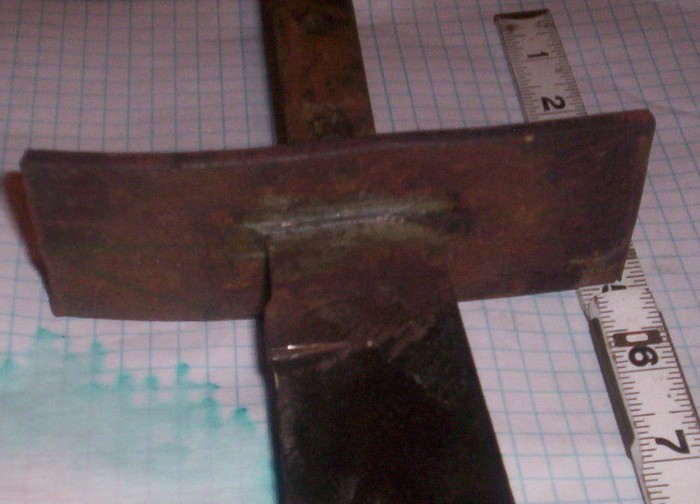 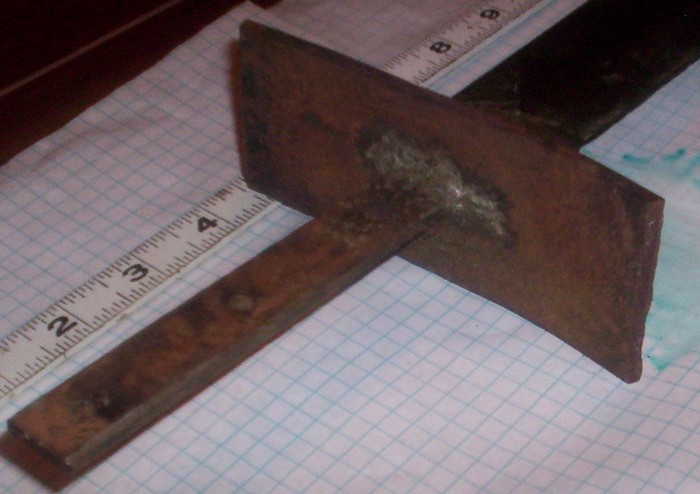 Please make me an Athame that is a true Athame.... Pweaseeeee

need to know size and style of what you want:

An Athame or Athamé (/əˈθɒm/, /ˈæθəmeɪ/ or /əˈθeɪmiː/) is a ceremonial dagger, with a double-edged blade and usually a black handle. It is the main ritual implement or magical tool among several used in the religion of Wicca, and is also used in various other neopagan witchcraft traditions. A black-handled knife called an arthame appears in certain versions of the Key of Solomon, a grimoire originating in the Middle Ages.

The athame is mentioned in the writings of Gerald Gardner in the 1950s, who claimed to have been initiated into a surviving tradition of Witchcraft, the New Forest Coven. The athame was their most important ritual tool, with many uses, but was not to be used for actual physical cutting.

There has been speculation that Gardner's interest and expertise in antique swords and knives, and in particular the magical kris knives of Malaysia and Indonesia, may have contributed to the tool's central importance in modern Wicca.

On the other hand, the athame stands as one of the four elemental tools in Wicca; traditionally standing for fire, as does the ritual sword. (From the known origins of Wicca, with Gardner's own Book of Shadows, the athame represents fire; where the wand corresponds to air. Other varieties of Wiccan practice may switch those two around.) The other three elemental tools are the wand, the pentacle, and the cup or chalice. These four magical tools correspond to four 'weapons' of significance in Celtic myth - the sword, the spear, the shield, and the cauldron (and/or grail). The same four ritual tools also appear in the magical practices of the western hermetic tradition, derived from The Golden Dawn; and they appear in tarot decks as the four card suits: swords, cups, wands, and pentacles. The athame is an individual ritual tool, while the sword is more appropriate as a coven tool, or the personal tool of the high priest or high priestess. There are obvious risks associated with an entire group of people all wielding swords, while confined within a small ritual circle space nine feet in diameter; this safety factor, as well as ease of use, may explain why the emphasis within Wicca is more on each witch's personal athame, rather than the ritual sword.

The term athame derives, via a series of corruptions, from the late Latin artavus ("quill knife"), which is well attested in the oldest mansucripts of the Key of Solomon. It means "a small knife used for sharpening the pens of scribes" ("Cultellus acuendis calamis scriptorii"). Artavus is well-attested in medieval Latin, although it is not a common word. This explains why it was left untranslated in some French and Italian manuscripts, and ultimately became garbled in various manuscripts as artavo, artavus, arthana, artanus, arthany or arthame. Latham described the etymology of artavus as being dubious, but Johannes Balbus de Janua (Catholicon, 1497) derives it from arto, artas, etc. (to narrow). An alternate etymology is given by John de Garlande, (ca 1225): "Artavus, called 'kenivet' in French, namely a small knife which stretches in length, is named after 'ars' (art or craft), because it is used by artisans." (as opposed to either a table knife cultellos ad mensam, mensaculos, or a weapon) (Artavus dicitur Gallice 'kenivet,' scilicet cultellus qui tendit in altum; vel dicitur ab arte, quia eo artifices utuntur.)

Idries Shah, who was personal secretary and close friend of Gerald Gardner, provides yet another etymology from an alleged Arabic al-dhammé "blood-letter", which was supposed to be the ritual knife of a medieval magical cult of Morocco and Andalusia. This etymology is controversial, however. It appears in his book The Sufis as a quotation from A History of Secret Societies by Arkon Daraul (a probable pseudonym of Shah). Robert Graves (an acquaintance of Shah) suggests an Arabic derivation from al thame (or adh-dhame), which he translates as "the arrow".

A Latin manuscript version of the Key of Solomon has a drawing that looks like a sickle, labeled Artavo. Gerald Gardner's use of 'athame' probably came from modern French versions of the Key of Solomon, probably via Grillot de Givry's Witchcraft, Magic and Alchemy (1931), who misinterpreted the term as applying to the main ritual knife, as shown by his index entries "arthane" or "arthame"

The Malay kris is a ritual knife regarded as having magical powers, and Gerald Gardner was a recognised authority on these knives prior to his involvement in Wicca.
The Roman secespita was a ritual knife; however, it was used for sacrifice.
Zoroastrian priests ("magi") traditionally used a knife ("kaplo"), a spear (or stick with a nail on the end), or even the forefinger, to draw ritual furrows ("karsha") for purpose of protecting the sacred ritual space from evil and ritual pollution 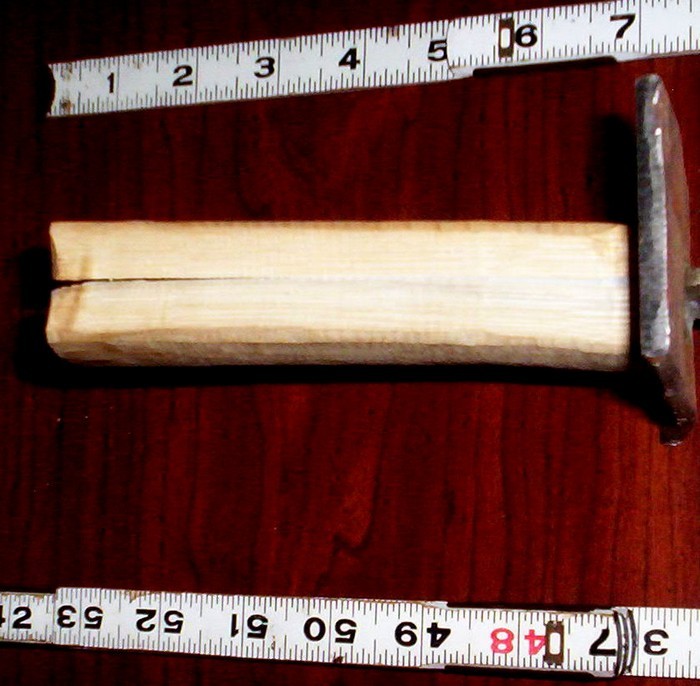 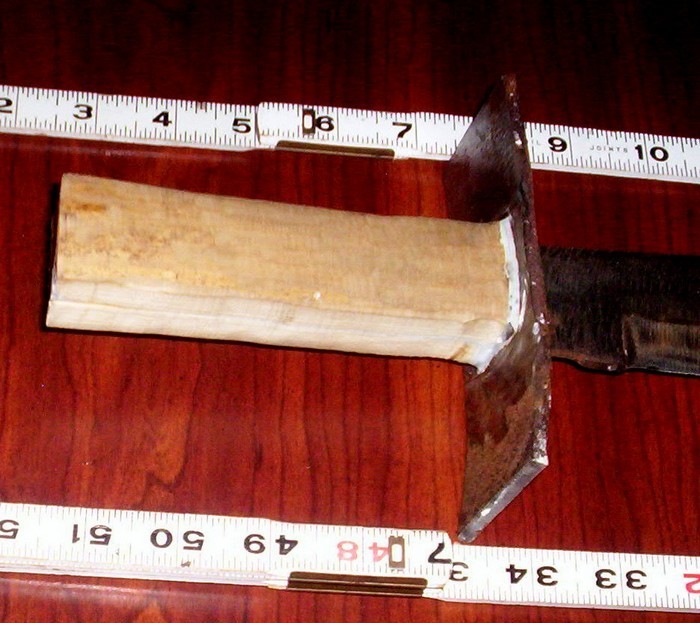 after sanding the excess down I find where I need to fill in with more epoxy. Pin the scales shape the guard and hilt as well. Then the Toga Bowie will be ready once again.