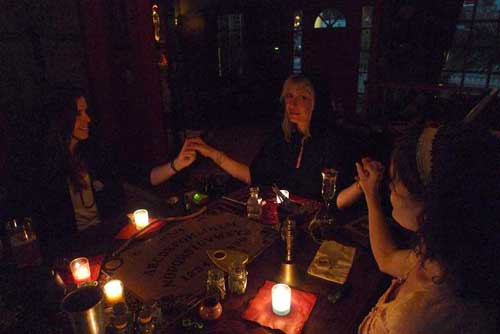 I received a phone call this afternoon from a friend.  The first words out of her mouth were have you ever been involved in a séance?  I was rather puzzled by her question as it's not a topic she would ordinarily just out right ask about; I stated yes, but only as a participant.  She went on to say, that a few weeks ago she had participated in some kind of group magick ritual as a joke (she doesn't believe in magick) and ever since that particular evening has been experiencing some 'paranormal' things. She believes something had basically followed her home and or is attached to her.

Then, she exclaimed she wanted to conduct a séance and was curious if I would head it.  I just had to laugh, if knew her you would understand why, she's rather a prude when it comes to anything related to mysticism but gets herself sorts of trouble; one day it's my hopes she pulls her head out of her butt and makes the connections. But until then, she will undoubtedly continue to get herself in over her head.

Anyway, I explained to her that I was not a medium, that the seldom times I've communicated with spirits has been through an emapthic means, and it's quite rare for me to be able to actually communicate in a means that would bring forth a message instantly, as I have to sleep on it, per say.  She didn't care, she's adamant she has to have a séance... gawd...She named off 4 other friends that already said they would participate if she could convince me to join in as well hahahah...As I don't have any plans it appears we're going to attempt a séance lol... So, I thought I had better do a bit of research on the subject, thus below is instructions on how to perform one.  (Wish me luck hahah).

The instructions for séances vary, depending upon which resources you are using. People from Nostradamus to Harry Houdini's wife have conducted them using methods that were the most popular during their particular time period. The following overview represents the styles of séances held several hundred years ago as well as those held today.

Why Conduct a Séance?

For people who want to contact a spirit from the other side, one of the best ways to do that is through a séance. A séance uses a group of people that concentrate on one specific goal: contacting a spirit. Séances were very popular during Victorian times, and even Houdini's widow used them as a way to communicate with her beloved Harry. Charlatans have also used séances as a way to bilk people out of money in the past, but today a session may be conducted without the employment of a professional medium.

Conducting your own séance is often easier to do after you have attended a few séances held by others. This will give you an idea of what to expect, as well as how to handle the unexpected. Of primary importance is selecting the right people for the séance. The individuals should be open to the idea of contacting the spirit world, not debunking it. If your séance doesn't work the first time, keep trying. With practice, and the right people in attendance, you'll eventually make contact with the spirit world.