Lammas, also called Lughnasadh, falls at the beginning of the harvest season. Apples are ready and grain is beginning to ripen. It's also a day for honoring Lugh, the Celtic craftsman god.

Lammas is a time of celebrating the beginning of the harvest, a theme seen often in the sacrifice of the grain god.

Lammas, also called Lughnasadh, falls at the beginning of the harvest season. Apples are ready and grain is beginning to ripen. It's also a day for honoring Lugh, the Celtic craftsman god.

August 1 is known as Lammas, or Lughnasadh (it's February 1, if you're in the Southern Hemisphere). This is a day to celebrate the beginnings of the harvest, when the grain and corn is gathered. It's also a time, in some traditions, of honoring Lugh, the Celtic craftsman god. Here are some ideas for dressing up your altar for your Lammas (Lughnasadh) celebration!

Lammas/Lughnasadh is a celebration of the early grain harvest

In nearly every ancient culture, Lammas was a time of celebration of the agricultural significance of the season. Because of this, it was also a time when many gods and goddesses were honored.

Honoring Lugh of the Many Skills
August 1 is known in many Practitionertraditions as Lammas, and is a celebration of the early harvest. However, in some paths, it's a day to honor Lugh, the Celtic god of craftsmanship.

Lammas is the first of three harvest Sabbats, and celebrates the crops of late summer and early autumn.

A time of grain and fruit, Lammas (also called Lughnasadh) is the first of three Practitionerharvest celebrations. In some traditions, it's the day to honor Lugh, the Celtic craftsman god.

There are a lot of myths and folklore surrounding Lammas, or Lughnasadh.
Spirit of the Grain - Honoring the Soul of the Harvest
The idea of honoring a "corn mother" at Lammas time is hardly a European invention.

The Legend of John Barleycorn
A traditional English harvest legend is the story of John Barleycorn, whose tale is a metaphor for the cycle of grain, and includes birth, suffering, death and eventual rebirth.
The Final Sheaf
In many countries, the harvesting of the final sheaf of grain was cause for celebration. Find out why this Lughnasadh tradition was so special in the countries of the British Isles..

This was a time to celebrate the bounty of the earth that gives to us our daily bread.

These are the Dog Days* of Summer when we also give thought to regrets and farewells.

Lammas is an excellent time to look around and take stock. The year and the summer are half over. Think of the things you meant to do this summer and as yet have not and of the thing that have not come to fruition in your life. Remember those things that have left your life.

Consider what has come into your life.

This is the experience of the turning of the year. The seasons are winding down to the time of peace and rest from whence they shall rise again anew in the spring.

This concept is represented in many pantheons such as the Greek Goddesses: Demeter

Things to do on Lammas

Bake a grain man and offer it to someone in thanksgiving

Lammas Bread Wishing Spell
Make a loaf of bread at Lammas and before you put the loaf into the oven, dip a paintbrush in milk and write on the crust what you most desire. Bake the bread, then eat it while still warm.

Lammas Bread Protection Spell
A book of Anglo-Saxon charms advised the crumbling of the Lammas loaf into four pieces and the burying of them in the four corners of the barn to make it safe for all the grain that would be stored there. You can use this old spellcraft in a protection spell for your home.

Bake a Lammas loaf, and when it is cool break it into four pieces don't cut it with a knife and take one to each corner of your property with the words:

I call on the spirits
Of north, and south, east and west
Protect this place
Now, at the time of the Blessing.

Leave the bread for the birds to eat or bury the pieces. From Lammas: Celebrating The Fruits Of The First Harvest
by Anna Franklin and Paul Mason A Harvest Spell Set an orange candle on either side of the caldron. On a piece of paper (small)write the things you have harvested over the past year, light the paper from one of the candles and let it burn in the cauldron. After it is done put some corn (or squash) seeds in the cauldron. "Stir" the seeds with your wand visualizing white light coming from the tip of the wand, filling the cauldron and entering the seeds. When you feel the seeds have absorbed their fill stop, put the seeds into another container to be kept on the altar until next year's planting.

In many cultures, there are different legends and lore surrounding Lammas (Lughnasadh). Here are a few of the stories about this magical harvest celebration from around the world.

In Israel, the festival of Shavout commemorates the beginning of the harvest, as well as honoring the date that Moses received the Torah on Mt. Sinai. The final sheaf of wheat is brought to the rabbi for a blessing, synagogues and homes are decorated with flower, and a great feast is prepared for all to enjoy.

The festival of Onam is celebrated in India, and people dress up in their finest clothes and give food to the poor. Onam is celebrated in honor of King Mahabali, who was a ruler of Kerala. In one story, the god Vishnu approached Mahabali dressed as a beggar, and asked for land, which Mahabali gave him. Mahabli ended up buried under the earth by Vishnu, but was allowed to return once a year, symbolizing the planting of the seed and the subsequent harvest.

Thor's wife, Sif, had beautiful golden hair, until Loki the prankster cut it off. Thor was so upset he wanted to kill Loki, but some dwarves spun new hair for Sif, which grew magically as soon as it touched her head. The hair of Sif is associated with the harvest, and the golden grain that grows every year.

In the Shetland Islands, farmers believed that grain harvesting should only take place during a waning moon. They also believed this about the fall potato crop, and the cutting of peat.

At Lughnasadh, calves are weaned, and the first fruits are ripe, such as apples and grapes. In some Irish counties, it was believed farmers had to wait until Lughnasadh to start picking these fruits, or bad luck would befall the community.

In some countries, Lammas is a time for warrior games and mock battles. This may hearken back to the days when a harvest festival was held, and people would come from miles around to get together. What better way for young men to show off their strength and impress the girls than by whacking away at all the competition? Games and contests are also held in honor of Lugh, the mighty Celtic craftsman god, in which artisans offer up their finest work.

It's become a custom to give people the gift of a pair of gloves at Lammastide. In part, it's because winter is just around the corner, but it's also related to an old tradition in which landowners gave their tenants a pair of gloves after the harvest. The glove is a symbol of authority and benevolence. 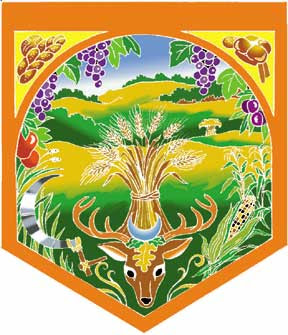