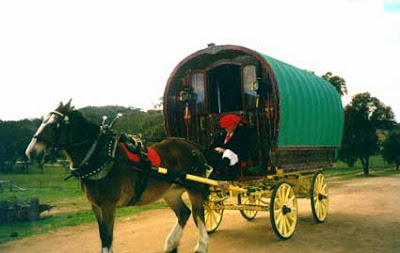 Here is a cute little Gypsy "house" called a Vardo. For the majority of Gypsies, their vardo, or wagon, was their most prized possession.

Funerals are a very important rite of passage for the Gypsy Traveller community. When a Gypsy dies it is usual for a vigil to be kept over the body, which is kept illuminated until after the time of the funeral. The deceased is usually buried with the owner's intimate personal possessions such as jewellery and trinkets.

Some Gypsy funerals will attract people from all over the country to pay their respects and floral tributes are usually on a grand scale. Personal items belonging to the deceased such as clothing, bedding and china are usually burnt or destroyed after the funeral. Many years ago, the wagon was very often burnt as well, but this is rarely done today. 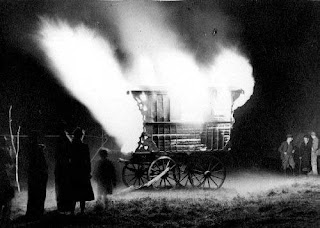 There are six design types. They are known by various names but are perhaps best called the Reading, the Ledge and the Bow-top. The Bow-top is the most typically Romani; the now extinct Brush – characteristic of brush, broom, rush and wickerwork makers; the Burton – most typically showman; and, the more modern one, the Open-lot. 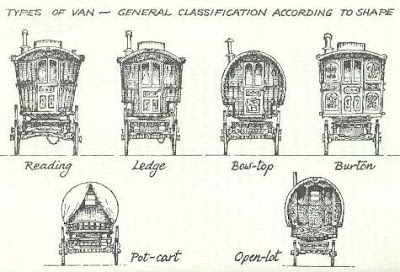 Being individually built, no two wagons are exactly alike. They vary according to customer requirements, price, skill and location of builder and period. At the same time they have certain exterior features in common, and with few exceptions the interiors conform to a set plan or layout. Thus, the vardo is always one-roomed on four high wheels, with door and moveable steps in front (the Brush wagon the only exception), sash windows, a rack called the ‘cratch’ and a pan-box at the rear.

Only minor variations in design occurred after about 1910, with the exception of the more modern Open-lot. Even the home-made vans - 'peg-knife wagons', supposedly shaped with the aid of that tool - tended to be along the same lines as the professionally built wagons. It was not uncommon for a traveler to add or remove features of an old wagon, re-mount a body on underworks other than its own, or replace unsound wheels by ones that differed in weight, size or structure from the original, thus altering the proportions.

Inside the wagon the atmosphere is snug and homely, and the finer vans have an almost regal splendor. Almost everything one needs is to hand. Even in winter you need never be cold. The fire in the stove, if built up with windows closed for half an hour, will so heat the rails near the roof that they will be too hot to hold. One of the Coopers once claimed that he could bake a cake in his van by stoking up the fire, shutting the windows, and leaving the mixture in the tin on the table!

Inside the wagon the cabinet work may be either dark red polished mahogany or stained pine, and the walls are grained or scumbled in light-golden brown. In the vans that have had a lot of wear and tear the original wood finish has often been painted or grained over. 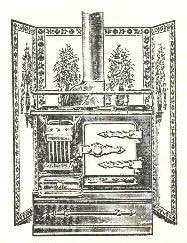 Internal layout, which varies little from type to type or van to van, has not changed for a century. The basic needs of the resident are the same and, in such confined space, there is only one sensible way to meet them. The entrance is frontal and half-doored. Through it, and on your immediate left, you find a tall, narrow wardrobe and beneath it perhaps a small brush cupboard. The fireplace stands next, and is always on the left as you enter, for on that side the chimney pipe is in less danger from roadside trees. From a point about two feet above the top of the stove, the fireplace is boxed in to form an airing cupboard. On the front of this cupboard and above the fireplace is a brass-railed shelf and next comes the offside window, and beneath a locker seat for two.

To the right, as you enter, is a bow-fronted corner cupboard; the top part , usually having glass doors, is probably used for displaying china, and the cupboard below for boots and cleaning gear. Opposite the fire there is another locker seat, and of a cold winter’s day it is good to sit there, lean back and place your stockinged feet on the brass guard rail on the front of the stove. Next to the seat is a bow-fronted chest of drawers.

Filling in the back of the van is a two-berthed bed-place, the top bunk just below the rear window, and beneath it are two sliding doors. These in the daytime shut away a second, shorter bed-place in which the children sleep. Light is supplied from a bracket oil-lamp above the chest of drawers, the surface of which is used as a table. More light may come from candles.