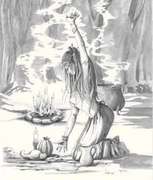 Seeing the Future at Halloween

In many agricultural societies, a popular pastime at Samhain was that of divining the name of one's future lover. Some revealed a face, others an initial or even a full name. These traditional methods were practiced in rural societies for centuries. You can use them today for your own divination. Apples have always been popular tools for foretelling the future. There are a number of traditional methods in folklore for seeing who one's lover might be.

Water has always been known for its magical properties, so it's only natural to use it for divination workings. Try one of these on Samhain night.

There are a number of divinations that use foods, baking and cooking as their focus. Some of these are still practiced today.

In some areas of the Celtic lands, people believed that a special fire, called the Needfire, could be used to create magical results. However, much like Harry Potter's Room of Requirement, the Needfire could only be created in times of great need. In many areas, Samhain was seen as an opportune time for the Needfire -- after all, the harvest was over, the earth was getting cold, and in just a few short months, your family could be starving and freezing. The Needfire helped to assure that your family would be safe from famine, pestilence, the deadly cold, and other natural disasters. In some nomadic societies, the Needfire was the place to make offerings - if you wanted to have a healthy crop of sheep, for example, you might carve an effigy of a ewe and toss it in the fire. Perhaps you'd throw a few seeds in there to assure an abundant crop in the following season.

Traditionally, the Needfire was lit without the use of iron. It could only be started by rubbing a pair of sticks together, or twisting a rope along a stake until a spark was created. In some areas, it was considered acceptable to use embers from a tree that had been hit by lightning as your starter, but typically, the Needfire was started by hand. Although it can be tricky to start a fire without flint or matches or a lighter -- anyone who's watched survival shows on television knows this -- it is indeed possible to do it. If you practice your technique ahead of time, you should be able to light a Samhain Needfire to help protect and guard your family through the coming year.

There are some excellent resources online for how to make a fire using a bow-drill, which is basically a piece of wood with a string, run along a spindle until a spark is created. Check these websites for an idea of how you can get your Needfire started:

Light your Needfire on the night of Samhain Eve. Once the sparks have caught, and you have a good blaze going, make an offering to the deities of your tradition, thanking them for keeping an eye on you in the coming year. You may also wish to make an offering to your ancestors, invoking them to protect your family.

"Sam" and "hain" meant "end of" and "summer" to the Celts. They observed only two seasons of the year: summer and winter. So, Samhain was celebrated at the transition of these seasons.

Samhain, (pronounced SOW-in, SAH-vin, or SAM-hayne)is the third and final Harvest. The dark winter half of the year commences on this Sabbat. It is generally celebrated on October 31st, but some traditions prefer November 1st. It is one of the two "spirit-nights" each year, the other being Beltane. Originally the "Feast of the Dead" was celebrated in Celtic countries by leaving food offerings on altars and doorsteps for the "wandering dead".

To Witches, Samhain is one of the four High Holidays, or Greater Sabbats. Because it is the most important holiday of the year, it is sometimes called The Great Sabbat. Pagans consider Samhain the most magical night of the year. It occurs exactly opposite of Beltane on the Wheel of the Year. It is a night of glowing jack-o-lanterns, tricks or treats, and dressing in costume. A night for telling chilling ghost stories by the fire. And a time for seances, tarot card readings and scrying with mirrors. It is upon this night, that the veil which seperates our world from the Otherworld is at its thinnest, making it a Night of Power.

As Witches,we observe this day as a religious festival. We consider it a memorial day for dead friends and family. It is still a night to practice various forms of divinitory arts such as scrying and rune casting. One could never hope for a better Tarot reading than on this night! Samhain is considered a time to wrap up old projects, take a good look at one's stock in life, and consider new projects and endeavors for the coming year.

Bonfire, hearth fire, candle - gaze into the flame and revisit our ancient heritage. Draw friends close and leave an offering for the whispering ghosts. Samhain is here.

'Listen! The wind is rising,
And the air is wild with leaves,
We have had our summer evenings,
Now for October eves!'

'Witches are alive & magic is upon us,
blessed be the season of the witch'...