The witch trial that made legal history By Frances Cronin

In recent years children as young as three have given evidence in court cases, but in the past children under 14 were seen as unreliable witnesses. A notorious 17th Century witch trial changed that. 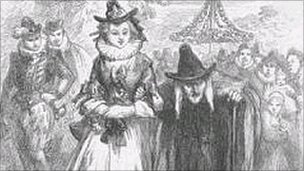 Nine-year-old Jennet Device was an illegitimate beggar and would have been lost to history but for her role in one of the most disturbing trials on record.

Jennet's evidence in the 1612 Pendle witch trial in Lancashire led to the execution of 10 people, including all of her own family.

In England at that time paranoia was endemic. James l was on the throne, living in fear of a Catholic rebellion in the aftermath of Guy Fawkes' gun powder plot. The king had a reputation as an avid witch-hunter and wrote a book called Demonology.

"It was a mandate for the British to fight witches," explains Prof Ronald Hutton from the University of Bristol.

At the time Lancashire had a reputation for being full of trouble-makers and subversives. Jennet lived with her mother Elizabeth, her grandmother Demdike, older sister Alizon and brother James in the shadow of the Pendle hill. Villagers dubbed Demdike a "cunning woman".

In March 1612, Alizon cursed a pedlar who would not give her any pins. The pedlar collapsed and his son reported it to an ambitious local magistrate, Roger Nowell.

He interviewed Alizon, who confessed to bewitching the pedlar but also accused their neighbours, who the family were having a feud with, of bewitching and killing four people.

The neighbours pointed the finger straight back at Demdike, accusing her of witchcraft.

"He sees his route to success in his career is to identify non-conformists, that could be Catholics or witches, and bring them to justice."

He arrested Alizon, granny Demdike, as well as their neighbours Anne Whittle (also known as Chattox) and her daughter Anne Redferne.

Jennet's mother then hosted a party on Good Friday, when all "good citizens" should have been in church. A local constable heard rumours of a meeting of witches, so arrested everyone present. The family also implicated others and all were accused of trying to plot to kill a man using witchcraft.

Alice Nutter, from a respectable land-owning family, her sister-in-law, nephew and friend were among those arrested.

"At that time they were a strong Catholic family. I think [Nowell] thought he would curry favour with the King and the powers that be if he was catching Catholics as well," says Colin Nutter, a descendant of Alice who still lives near the Pendle hill.

"She was used as a pawn for his own ends really."

In his book Demonology, James l wrote: "Children, women and liars can be witnesses over high treason against God." This influenced the justice system and led to Nowell using Jennet as his key witness.

The clerk of the court, Thomas Potts, wrote a book of all the notes he made of the trial, which became a bestseller and spread the story far and wide.

In The Wonderful Discoverie of Witches in the Countie of Lancaster, Potts recounted how Jennet's mother Elizabeth screamed out when her daughter entered the court. Jennet demanded her mother be removed and then climbed on a table and calmly denounced her as a witch.

Her convincing evidence was believed by the jury and after a two-day trial all her family and most of her neighbours were found guilty of causing death or harm by witchcraft.

The day after they were hanged at Gallows Hill.

But Jennet's influence went far beyond Lancashire. Thomas Potts' writings and Jennet's evidence were included in a reference handbook for magistrates, The Country Justice.

The book was used by all magistrates, including those in the colonies in America, and led them to seek the testimony of children in trials of witchcraft.

So at the notorious Salem witch trials in 1692, most of the evidence was given by children. Nineteen people were hanged. 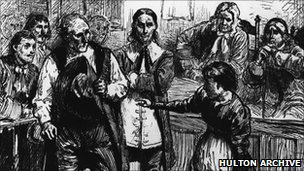 There had been earlier cases of children being witnesses in witch trials, but the law stated those under 14 were not credible witnesses because they could not be sworn under oath. Jennet's testimony changed all that.

Today children of any age can be called to give evidence as their competence depends upon their understanding not their age.

Ultimately though, Jennet fell victim to the very precedent she set herself in 1633.

Twenty years after the trial she too was accused of witchcraft along with 16 others by 10-year-old Edmund Robinson.

They were found guilty by a jury but the judges were not happy and it was referred to the Privy Council. England had become more sceptical over time and physical evidence was demanded.

Edmund eventually admitted lying because of the stories he had heard about the Pendle witch trial.

The last known record of Jennet Device was in 1636.

Despite having been acquitted she was not allowed to leave Lancaster Castle until she had paid for her board for the time she had spent there on trial. For someone like Jennet, that could have been impossible. 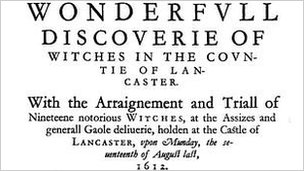 "At 12 noon about 20 people came to our house - my mother told me they were all witches."

She named six people whose names she knew and her mother and brother.

James denounced his mother Elizabeth too but Jennet then turned on her own brother and said he had been a witch for three years. She said she had seen his spirit kill three people