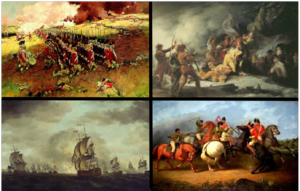 From Wikipedia, the free encyclopedia

The American Revolutionary War (1775–1783) or American War of Independence[6] began as a war between the Kingdom of Great Britain and thirteen British colonies in North America, and concluded in a global war between several European great powers.

The war was the culmination of the political American Revolution, whereby many of the colonists rejected the legitimacy of the Parliament of Great Britain to govern them without representation, claiming that this violated the Rights of Englishmen. The First Continental Congress met in 1774 to coordinate relations with Great Britain and the by-then thirteen self-governing and individual provinces, petitioning George III of Great Britain for intervention with Parliament, organizing a boycott of British goods, while affirming loyalty to the British Crown. Their pleas ignored, and with British soldiers billeted in Boston, Massachusetts, by 1775 the Provincial Congresses formed the Second Continental Congress and authorized a Continental Army. Additional petitions to the king to intervene with Parliament resulted in the following year with Congress being declared traitors and the states to be in rebellion. The Americans responded in 1776 by formally declaring their independence as one new nation — the United States of America — claiming their own sovereignty and rejecting any allegiance to the British monarchy.

France's government under King Louis XVI secretly provided supplies, ammunition and weapons to the revolutionaries starting in 1776, and the Continentals' capture of a British army in 1777 led France to openly enter the war in early 1778, which evened the military strength with Britain. Spain and the Dutch Republic – French allies – also went to war with Britain over the next two years, threatening an invasion of Great Britain and severely testing British military strength with campaigns in Europe — including attacks on Minorca and Gibraltar — and an escalating global naval war. Spain's involvement culminated in the expulsion of British armies from West Florida, securing the American colonies' southern flank.

Throughout the war, the British were able to use their naval superiority to capture and occupy American coastal cities, but control of the countryside (where 90% of the population lived) largely eluded them because of the relatively small size of their land army. French involvement proved decisive, with a French naval victory in the Chesapeake leading at Yorktown in 1781 to the surrender of a second British army. In 1783, the Treaty of Paris ended the war and recognized the sovereignty of the United States over the territory bounded by what is now Canada to the north, Florida to the south, and the Mississippi River to the west